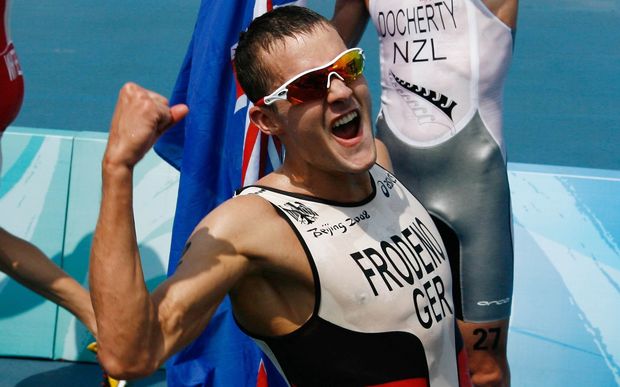 The 2008 Olympic gold medallist at the shorter distance came out the water in second place and broke away on the bike leg to set up his victory.

He was never challenged in the marathon run and clinched the most coveted title in the sport, while Swiss Daniela Ryf won the women's title by a huge margin of more than 13 minutes.

Best of the New Zealanders were Kona rookies Dylan McNeice, who was among the leaders out of the water, and finished in 38th place in 9:58:17, and Nelson's Britta Martin, who produced a strong 3:18 marathon to be 17th in the women's race.

In brutal heat and humidity, even by Big Island standards, Frodeno finished the 3.8 km swim, 180 km cycle and 42.2 km run in eight hours, 14 minutes and 40 seconds.

"I am just over the world," the 34-year-old Frodeno said in a finish-line interview. "Besides the Olympic title, nothing compares, nothing else matters.

"This is the Wimbledon of our sport. It's just like in tennis, if you haven't won Hawaii it's like, 'yeah'. I am so happy."

Frodeno, 34, stopped frequently at aid stations during the run to cool himself down with ice, figuring the few seconds he sacrificed was worthwhile.

"I had good run form, but it was brutal," he said. "In Hawaii there's no shade at all, nothing. If you're up on the hills, your heart rate goes up and doesn't come down. The only way to get it (down) is ice.

"Everybody laughs at me for stopping but you know what, I'm a world champion, I don't really care."