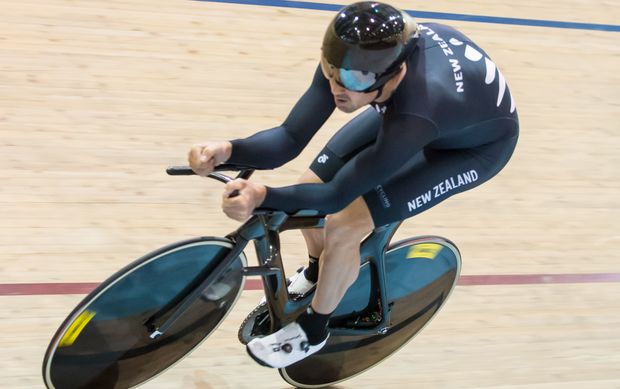 Roulston helped New Zealand win the team pursuit gold on the opening night of the four-day championship on Thursday.

Roulston is representing New Zealand on the track for the first time since the 2008 Olympics.

Looking to end his cycling career with gold at next year's Rio Games, Roulston was happy with his results after a couple of tough weeks of preparation.

"Last night you saw I've still got a lot of work to do and tonight I won based on experience," Roulston said.

"I was not good tonight, I'm still struggling with that lactate clearance. It's going to take a long time to come back, but to walk away from here with two golds and to have that monkey off my back is a good sign."

"We know that he's definitely still got everything he needs physically to be a fantastic track rider and he's come out and proved that over the last couple of days," Carswell said.

"He's still got work to do, but that's the great thing. He's made a great first step and it's exciting to see where it will go over the next few months."

"We've got a pretty good idea of where he'll fit in across the track season, in training camps and future competitions. Obviously the goal is to allow him the opportunity to continue that progression towards the world champs in February."

After leading qualification by more than a second from Rohan Wight during the morning session with a 4:25.185, Roulston managed to hold off a determined finish from the Australian to win the final in 4:27.552.

Earlier in the night, Invercargill's Bradley Knipe proved too strong in the under 19 men's 1000m time trial, but it was Australia that claimed the gold in both the under 19 and elite women's individual pursuit.

Georgia Baker headed off her Australian compatriot Macey Stewart by more than seven seconds for the elite women's gold.