The New Zealand driver Hayden Paddon has secured his fifth top-five finish of the World Rally Championship season at the tarmac based Rally Corsica. 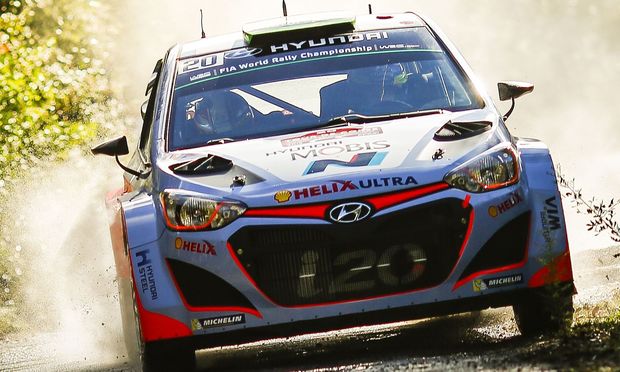 Starting the final day of the event dubbed 'rally of 10,000 corners' in seventh overall, Paddon leapfrogged two positions up the leader-board on the rally's penultimate stage before finishing the race in fifth place overall in his Rally Corsica debut.

His time for the 41.46 km twisting and turning tarmac test equalled that of rally winner Jari-Matti Latvala and was just 3.7 sec off their Hyundai t team-mate Dani Sordo who won the stage.

"I'm really happy with how the weekend's progressed," said Paddon.

"Having been 15th after the first stage, we would never have thought that we'd get into the top five come the end of the rally."

The rally hasn't been without its challenges as the French WRC round returned to Corsica for the first time in seven years.

It was Paddon debut on the iconic asphalt rally, plus extreme weather conditions on Friday meant the cancellation Saturday's special stage two and its repeat run as stage four on Sunday - significant on a rally with only nine scheduled stages compared to the usual 19 or 20 special stages.

Earlier in the event, particularly with the impact of the weather making the roads very slippery, Paddon focused on surviving and getting through the reduced number of stages.

An eighth quickest time on the second stage confirmed his position as tenth overall at the end of Saturday.

"It's been very tough," Paddon said.

"Obviously some very trying conditions early on, and then it's been slowly improving for the rest of the rally. We've been able to show some good progress from where we were in Germany. From this we can take a lot of positive signs."

Prior to the Corsica event, Paddon spent a day at a circuit racing school and two days training with ex-WRC driver Nicolas Bernardi in an effort to improve his performance on tarmac events, given his relative lack of experience on this surface

"We're much closer to our team-mates - okay, to be the leading Hyundai here is a nice surprise, but the most important thing is the progress we're showing on tarmac. We've been able to put the driving techniques I learnt before this event into practice and we can see the benefits of that."

"Obviously it still needs a lot of fine tuning and a lot of work before it becomes more natural in the car, but we're heading in the right direction."

"It's given us something now to work on for Spain which is our next rally on tarmac in three weeks. With a day on gravel in Spain as well, I think we can be a lot more competitive and try to be in the top five, at least, again. My confidence is good at the moment and we've got a lot of good things to look forward to."