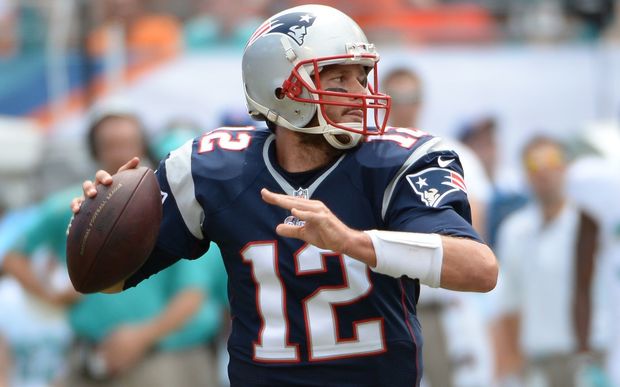 Just before half-time, Brady found wide receiver Danny Amendola in the end zone from one yard as the reigning Super Bowl champion Patriots took control against the Jacksonville Jaguars.

The Patriots led the Jaguars 20-3 at the interval before rolling to a commanding 51-17 victory.

"It was a good day, so it's fun to be out there," Brady told reporters after completing 33 of 42 passes for 358 yards, two touchdowns and no interceptions as New England improved to 3-0. "I think everyone enjoyed it.

"It was a good performance by our offense, a good team win. It was a good week of practice. A lot of guys made plays, so I was happy. It was a great day out there for football."

Brady joins an elite club, Peyton Manning of the Denver Broncos is the all-time NFL leader with 533 touchdown passes ahead of his side's game against Detroit, followed by the retired Brett Favre (508) and Dan Marino (420).

A four-time Super Bowl champion with New England, Brady started this season after a federal judge overturned a four-game suspension imposed by the NFL for his alleged role in deflating footballs during a playoff game last season.