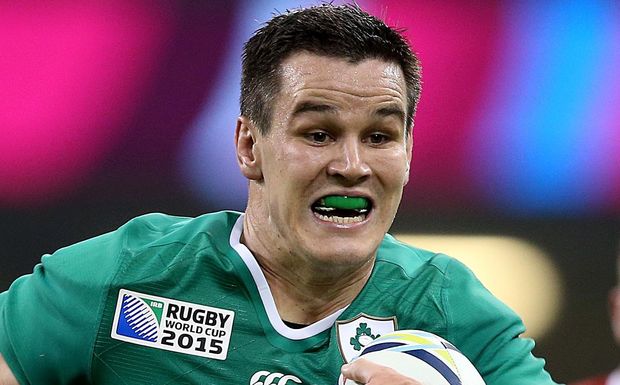 Sexton gave a masterclass in game management as Ireland asserted title credentials with the bonus point victory in their Pool D opener in Cardiff.

The Six Nations champions dominated the set piece, looked slick and creative in the backline and ran in seven tries under the closed roof at the Millennium Stadium.

Sexton contributed nine points from the kicking tee in his 55 minutes on the pitch and scored the pick of Ireland's tries, racing 40 metres to touch down in the 28th minute after being set free by a neat inside pass from Sean O'Brien.

Both captains spent 10 minutes in the sin-bin in a match that was otherwise played in a good spirit but it was the yellow card shown to Canada's Jamie Cudmore that proved the more costly.

The Irish scored their first three tries through flanker O'Brien, lock Iain Henderson and Sexton in the abrasive lock's absence to lead 22-0 after less than half an hour.

The Canucks played with plenty of passion but were never going to recover from such a large early deficit and winger Dave Kearney secured the bonus point after a sweeping Irish move five minutes before half-time.

Canada had chances to secure a consolation try at the end of the first half only for livewire winger DTH Van Der Merwe to be denied by the TMO for a forward pass and again soon after the break when Irish skipper Paul O'Connell was sin-binned.

That Ireland's defence, which had conceded nine tries in their four warm-up matches, held firm under huge try-line pressure from the Canadians augured well for tougher battles ahead.

Van Der Merwe did finally get the try Canada's efforts deserved on the breakaway in the 68th minute after snaffling up Irish centre Jared Payne's chip kick.

By that stage, though, replacement hooker Sean Cronin had scored Ireland's fifth try and there was still time for fullback Rob Kearney to match his brother's tally after a length-of-the field sprint from winger Keith Earls.

Canada next face Italy in Leeds, while Ireland take on Romania and the Italians before returning to Cardiff on October 11 for what is expected to be the pool decider against France.