Chelsea forgot their Premier League woes and got their Champions League campaign off to a flying start with a 4-0 thrashing of Israeli champions Maccabi Tel Aviv in their opening Group G match at Stamford Bridge. 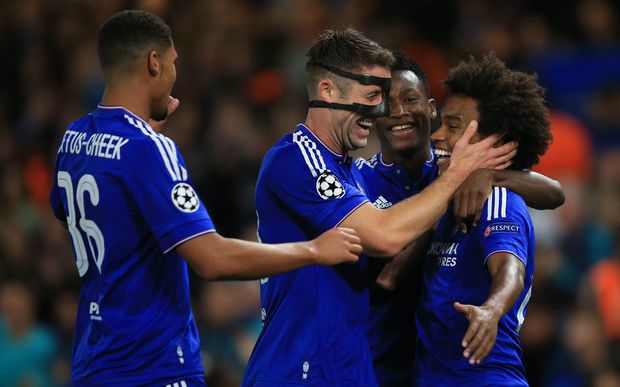 Despite Eden Hazard blazing an early penalty high over the bar, Chelsea scored twice in the first half with Willian finding the net with a 30-metre free kick after 15 minutes and Oscar scoring from their second penalty with the last kick of the opening 45 minutes.

Diego Costa, who replaced Willian after the Brazilian was injured after 20 minutes, brilliantly volleyed in Chelsea's third after 58 minutes with Cesc Fabregas finishing off a breakaway for the fourth after 78.

Maccabi, back in the competition proper for the first time in 10 years, went close through skipper Eran Zahavi and Nosakhare Igiebor, but Chelsea, 17th in the Premier League with one win from five matches, were never seriously troubled.

Chelsea manager Jose Mourinho made six changes to the side beaten 3-1 at Everton last weekend with captain John Terry among those on the bench, although Fabregas, who has lacked his usual creative inspiration, retained his place and had a hand in the third as well as scoring for the first time since April.

Arsenal's campaign didn't start so well - they lost a man and went down 2-1 at Dinamo Zagreb.

The Croatian club made a dream start with a goal in each half.

An Alex Oxlade-Chamberlain own goal followed by a Junior Fernandes header put Dinamo in the driving seat before Theo Walcott pulled one back for the Premier League side, who had striker Olivier Giroud sent off in the first half.

Having failed to advance past the group stage of Europe's elite club competition in their previous four attempts, Dinamo produced a morale-boosting performance in the Maksimir stadium.

Organised defending aided by a packed midfield frustrated a disjointed Arsenal and the home side always looked dangerous on the break, with Algeria striker El Hilal Arabi Soudani at the heart of all their moves.

Arsenal held the upper hand in the opening 20 minutes as Giroud missed two good chances, hitting the post with a scuffed effort after Dinamo's Portuguese keeper Eduardo had kept out the Frenchman's header with an acrobatic save.

The Croatian champions took the lead against the run of play with Chamberlain unable to get out of the way of a rebound after Arsenal keeper David Ospina blocked a close-range shot by left back Josip Pivaric.

Worse followed for the visitors when Giroud was shown a second yellow card for a reckless challenge after he was booked for dissent.

In other games, champions Barcelona drew 1-1 with Roma and Bayern Munich beat Olympiakos 3-0.