The young New Zealand driver Mitch Evans has won the sprint race in the GP2 series at the Monza Grand Prix, his first victory of the Formula One feeder series season. 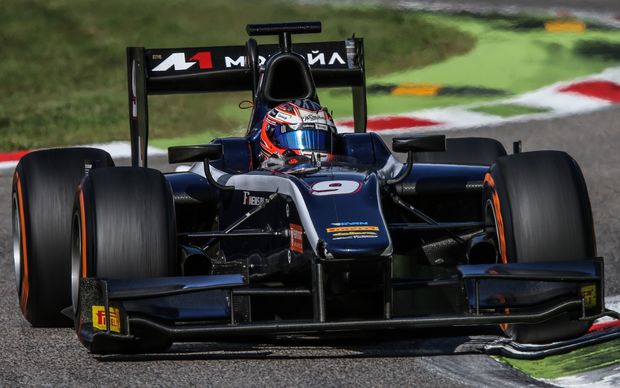 The Russian Time driver Mitch Evans of New Zealand competes in Round 8 of the GP2 series in Monza, Italy. 2015. Photo: PHOTOSPORT

It completes a memorable weekend for Evans who was third in Sunday's feature race.

Evans has now moved into fifth place in the championship.

The next round is in Sochi, Russia in October.

Not even disqualification from official qualifying and a back-of-the-grid starting position was enough to stop Evans continuing his welcome return to form with a timely double podium in this weekend's round nine and 10 of the series.

The 21-year-old delivered arguably the best drive of his career thus far in the 30-lap feature lap to take third place after storming through from 23rd on the grid.

A top-six grid position set him up nicely for Monday's 21-lap sprint race and having sat in second place for most of the race, Evans pulled off a brilliant last lap overtake to score his and his team Russian Time's first win of the season.

"I don't know how I really did it! It's all a bit of a blur to be honest," said Evans after the race. "I was so disappointed at being disqualified but I drove my heart out to try and get on the podium. I had a decent start and first lap and at the safety car I was 16th or 17th."

"I still had eighth in my sights and thought that was realistic so I went long on the option tyre and was one of the last to stop. After my stop, I started pinging them off and I thought I was good for fifth."

"But, the guys came on the radio and said if I could pass Pic I was on for a podium because Nato had a penalty - that was a bit of a surprise. I just wanted to keep it on the track and bring it home."

"Obviously Friday (the disqualification to the back of the grid) was a huge kick in the guts - it was nothing intentional and a complete accident, so it was good to come back and really show what speed we've got now."

"It's so good to have the car back to performing well and underneath me. I think today really proved that."

The 21-lap sprint race was just as thrilling with plenty of excellent wheel-to-wheel racing up and down the order.

Evans started from sixth but he was soon up to third place behind Pic and fellow New Zealander Richie Stanaway, before taking the lead on the final lap.

Stanaway finished fourth in both races.

"After yesterday, I thought a victory was possible but it wasn't really that easy," said Evans on the podium.

"Arthur was very quick and the DRS was not that effective but on the last lap I hoped to God I could pull the move off and gain the lead. It was mainly the tow that let me catch him down the straight."

"To get this win and put another strong weekend together is really what we needed. I know I'm able to push for more wins - our pace is good enough to challenge for poles and victories."

"It's been a really tough season so it's really great to repay the team like this and get my season back on track. I didn't really lose faith but I was getting to a point where I was getting very frustrated with everything, so this has really sparked me back up."