The Sydney Roosters have put an exclamation mark on their National Rugby League season with a 30-0 demolition of bitter rivals South Sydney. 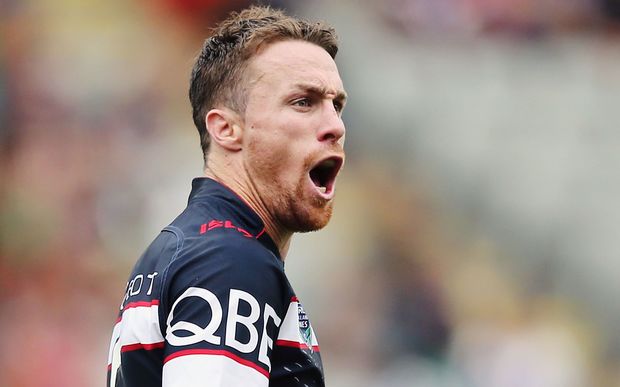 A day after claiming their third straight minor premiership when Brisbane lost to Melbourne, the Roosters were ruthless in their five-try victory in front of 25,019 at Allianz Stadium.

However, the emphatic win - their 12th in a row - may come at a cost with five-eighth James Maloney put on report for tripping and prop Dylan Napa on report for contact on Paul Carter's neck.

In the absence of halfback Mitchell Pearce, Maloney was again influential as the Roosters shot out to a 30-0 half-time lead but will come under scrutiny from the match review committee for a 25th-minute brain snap.

After coughing up the ball close to the Rabbitohs' line, Maloney stuck a leg out which collected Kyle Turner's thigh.

A grade-one tripping charge attracts 75 demerit points which would make him available for the first week of the finals, however is in danger of spending time on the sidelines should he attract a higher grading.

By the 23rd minute, the Roosters were scoring at better than a point a minute after running in tries through Michael Jennings, Blake Ferguson, Boyd Cordner and Jake Friend for a 24-0 advantage.

Kiwis international Shaun Kenny-Dowall also made a strong return to the field after missing the previous seven weeks, coming up with some vigorous carries but was outshone by his right-side partner Ferguson.

Prop Sam Moa stepped up in Jared Waerea-Hargreaves' absence while Roger Tuivasa-Sheck was at his creative and elusive best.

The only thing that went wrong for the Roosters was when their numbers started falling off the back of their jerseys during the first half.

The Roosters finished the season two competition points ahead of Brisbane and will meet either Melbourne, Cronulla or Canterbury in week one of the finals.

They became the first side since Manly in 1995-97 to win three straight JJ Giltinan Shields and the first side in a united competition since the Sea Eagles of 1971-73.

The Rabbitohs' hopes of back-to-back premierships appear in tatters after they conceded their second big scoreline in consecutive weeks after being thrashed 47-12 by the Broncos eight days earlier.

Missing Greg Inglis - who is due back from a knee injury next week - John Sutton and Issac Luke, the Rabbitohs barely fired a shot and were badly shown up in defence.