The All Whites coach Anthony Hudson has included Premier League defender Winston Reid in his squad for next week's international friendly against Myanmar but has left out fellow Europe based professionals Chris Wood, Ryan Thomas and Tommy Smith. 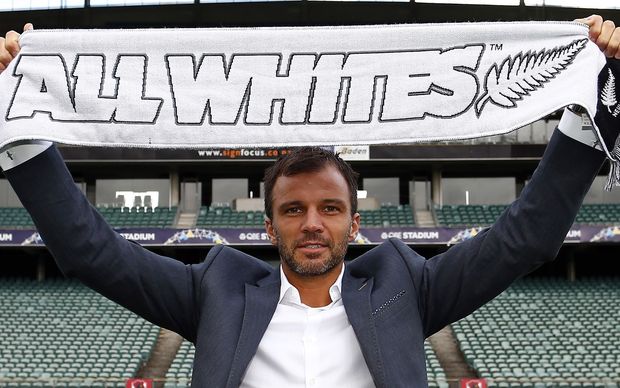 Deklan Wynne and Storm Roux were not available for selection due to the ongoing eligibility saga that stemmed from the recent Oceania Olympic qualifiers.

The Wellington Phoenix captain Andrew Durante has decided to step down from the All Whites.

Hudson says the Europe based trio of Wood, Thomas and Smith wouldn't be involved this time around.

"With injury, squad balance and travel distance also considerations for this one-match trip, we opted not to include Chris, Ryan and Tommy for this game."

Each of that senior quartet have over 20 international caps with Smeltz - the All Whites second-leading scorer all time with 23 goals - in line for his first international appearance since the 2013 FIFA World Cup intercontinental playoff against Mexico in Wellington.

At the younger end of the squad, six players from the Men's U-20 World Cup side have been included with Bill Tuiloma, Clayton Lewis, Moses Dyer and Sam Brotherton joined in the senior team for the first time by Alex Rufer and Te Atawhai Hudson-Wihongi.

Greece-based defender Themi Tzimopoulos is again included after making his debut for the All Whites against Korea Republic in March while young Logan Rogerson - a member of the current Men's U-17 side - is also named.

The inclusion of defenders Liam Higgins and Harshae Raniga - members of the Men's U-23 side - brings the total number of first-time All Whites travellers to five.

As they continue their quest towards qualification for the FIFA World Cup in Russia in 2018, Hudson said the time has come to begin to mix together the country's best rising talent with the senior backbone of the international set up.

"We have used the time leading up to now to identify the young players we wanted to work with moving towards the 2018 World Cup qualifiers," Hudson said.

"A number of players have taken full advantage of that opportunity and because we now have a clear understanding of who those players are, we welcome back a number of our senior internationals for this trip.

Wellington Phoenix goalkeeper Glen Moss was named in the squad but had to withdraw from the tour for family reasons.

Durante, who has played nine times for New Zealand, said the time was right with a number of talented younger players coming through.

"It's a good time to make this decision with the young players in my position and the strain of international travel takes a toll on the body as well as having an impact on my young family."

Hudson acknowledged the contribution Durante has made to the All Whites since his first match in 2013.

"I talked with Dura in depth about his situation and I completely understand and respect his decision," Hudson said.

"I thank him for the service he has given the national team and the door will always remain open to him if his circumstances change in the future."