Cronulla are on track to secure their first National Rugby League top-four finish since 2008 after surviving a big scare against Parramatta last night in Sydney. 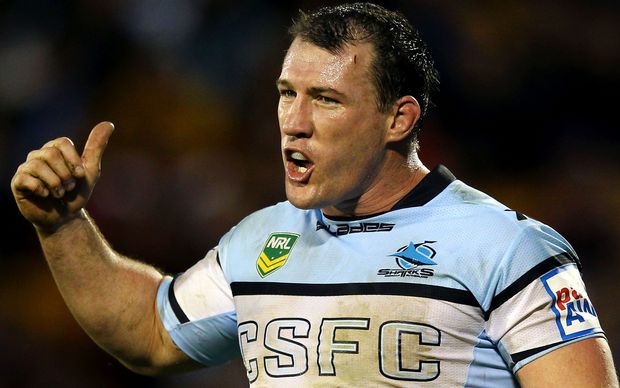 The Sharks won 35-28 to move into the top four for the first time this season after the 11-try thriller at Parramatta.

The victory lifts Cronulla up to fourth on 32 points, one win clear of South Sydney who the Sharks bump out of fourth place.

A win over Manly at Remondis Stadium next weekend in the final round before the playoffs would ensure the Sharks clinched fourth spot.

Cronulla coach Shane Flanagan said the Eels game should serve as a warning to his side.

"As you saw today with Parramatta, you just can't turn up ... they are going to make you work really hard for it and Manly will do the same next week," Flanagan said.

"We've got that belief ... at the moment. They're tricky games and they made me sweat it out in that box there."

The Storm showed they were serious finals contenders by knocking over competition heavyweights North Queensland 14-6 in Melbourne.

After turning in their worst performance of the season to lose to battlers Newcastle at the same venue on Monday night, the Storm rebounded with an impressive display that kept alive their slim top-four hopes.

Melbourne moved up to fifth on the back of the win, while the Cowboys remained third.

Meanwhile Canterbury are the latest team to suffer a major injury on the eve of the finals, with halfback Trent Hodkinson hurting his wrist in the Bulldogs 20-18 win over Newcastle.

The NSW No.7 is understood to have torn ligaments in his wrist after being felled in a brutal hit by Tariq Sims in a try assist for Tim Lafai midway through the first half.

A number of the league's heavyweights have been forced to test their depth in the second-last round of the year, and the Bulldogs will also have to test theirs with Frank Pritchard put on report for a coathanger on Jake Mamo in just the third minute.

The win lifts Canterbury into sixth spot above South Sydney.