Steve Smith made a brave unbeaten 78 to lift Australia to 287 for three on the first day of the fifth and final Ashes test against England at The Oval. 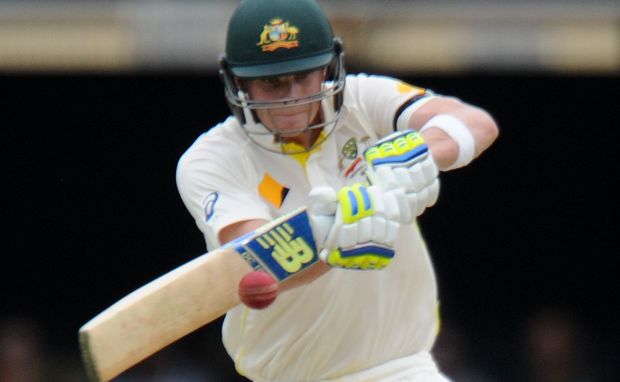 The tourists, 3-1 down in the series and bidding for a consolation victory after losing the Ashes, made a solid start after losing the toss with David Warner scoring 85 and Chris Rogers 43.

England, however, removed both openers and captain Michael Clarke for 15 to expose the fragile Australian middle order before Smith batted with calm authority in a partnership with Adam Voges that put their side in control of the match.

Voges will resume on 47 not out and Australia will look to build a large total to put England under pressure in their bid to win four home Ashes tests in a series for the first time.

Rogers, playing his last Test, and Warner had adopted a risk-free strategy in overcast conditions with memories of their collapse to 60 all out on the first morning of the last Test fresh in their minds.

They scored only 19 runs in the first hour and the first boundary came in the 15th over, the pair trying hard to lay a platform for their team after England regained the Ashes last week in Nottingham.

Australia took lunch on 82 for no wicket and the openers increased the scoring rate after the interval.

They looked in control until Rogers was surprised by a lifting ball from Mark Wood, edging a catch to first slip which Alastair Cook took at the second attempt to end a stand of 110.

Warner, closing in on his first century of the series, pushed forward to spinner Moeen Ali and nicked the ball to Adam Lyth at slip, swishing his bat in frustration before trudging off.

Clarke was given a standing ovation by the crowd and a guard of honour by the England players as he walked out to bat in his 115th and final Test.

He hit one flowing straight drive for four off Moeen and had survived for 42 minutes when he edged a short ball from Ben Stokes to wicketkeeper Jos Buttler.

Clarke reviewed the umpire's decision to give him out but television replays showed he had touched the ball and he left the field to more warm applause from the crowd.

Smith, who will succeed Clarke as Australia captain, had started cautiously but he broke the shackles by lifting Moeen for six over long-off before reaching his fifty off 84 balls.

Voges also played sensibly and the pair had added 69 when rain forced the players off the field.

They extended the partnership to 101 in the last hour to give Clarke hope of a swansong victory and a more respectable 3-2 series defeat.