The All Blacks winger Waisake Naholo has fractured a bone in his leg and will not be available for the World Cup. 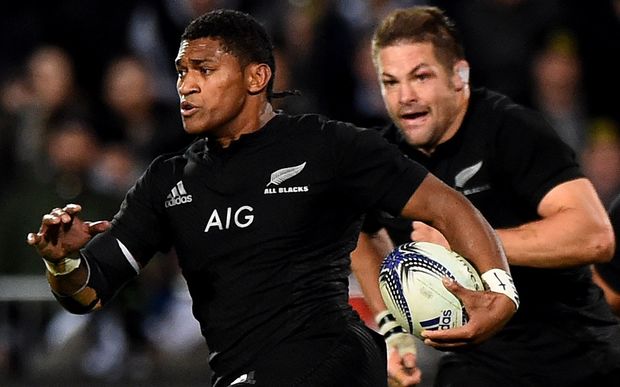 Waisake Naholo on the break against Argentina, with Richie McCaw in support. Photo: PHOTOSPORT

The 24 year old Fijian born flyer played his way into the national team after sublime form in the Highlanders' championship winning Super Rugby campaign in which he was the competition's leading try scorer with 12.

After a season playing for the All Black Sevens in 2012, Naholo made his debut for the All Blacks on the right wing in Christchurch on Friday night, as the home side romped to a 38-19 victory over Argentina.

His Test debut was impressive, featuring a high work rate, clever offloads and a competent performance of his core duties under the high ball and positionally on defence.

A clean line break showed his potential as a match winner and would have had selectors penciling his name into the World Cup squad of 31 before he limped off the field in about the 60th minute.

The All Blacks coach Steve Hansen says Naholo has cracked his fibia and won't be fit to play for three months.

"He's gonna miss the World Cup which is pretty disappointing for him and us."

"He impressed us and though he made a couple of small errors the good things he did were very, very good and he will blossom into a very good All Black."

"We're all a bit shocked about it (the injury). He was weight baring on it, but when he got back here it got really sore. The doc got it scanned and there's a really fine crack in it. There's no displacement (of the bone) and if we can get him right and we do need an outside back replacement he'll be fit and ready to go in the middle of October."