A New Zealand weightlifter has bowed out from the Pacific Games after what the New Zealand Olympic Committee said were inappropriate online posts. 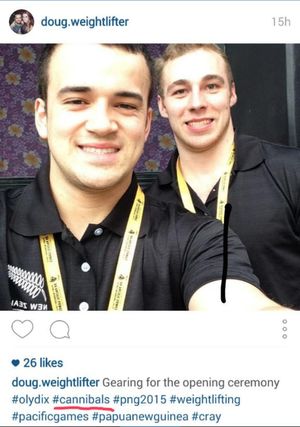 The Games, held every four years, are taking place in Papua New Guinea.

But Douglas Sekone-Fraser has withdrawn from his team after making reference to cannibals and Papua New Guinea on social media.

In a photo with the words, he appears to be wearing an official uniform with the New Zealand Silver Fern emblem.

The New Zealand Olympic Committee said it has formally and unreservedly apologised for any offence caused in the host nation, or among fellow competitors.

It said the comments in no way reflect the thoughts of New Zealand's wider Pacific Games Team.

It said Mr Sekone-Fraser had also wholeheartedly apologised to the team and to Papua New Guinea.

The committee said it had social media policies in place for New Zealand athletes at the Pacific Games.

New Zealand sent 65 athletes, including 35 weightlifters to the Games.