The Southland Sharks are favourites to take out the New Zealand basketball crown in Wellington this weekend when the country's top four teams play for the national title. 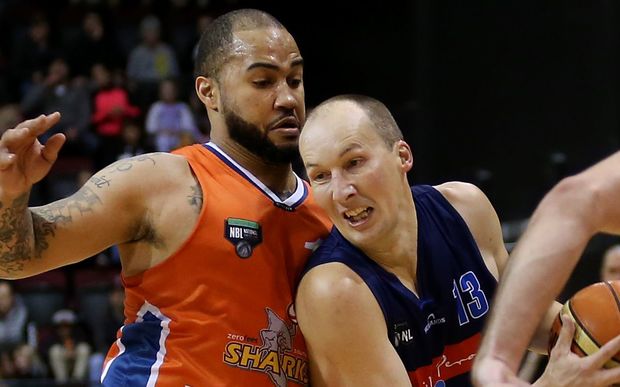 Phil Jones of the Giants drives passed Kevin Braswell of the Sharks during the NBL basketball match at Invercargill, June 13, 2015. Photo: PHOTOSPORT

The semi-finals on Saturday pit top qualifiers the Southland Sharks against the Waitakere Rangers and the second placed Nelson Giants against the third placed Wellington Saints.

The winners of the two games will play for the title in Sunday's final.

The Sharks have won 14 games in a row, but will be facing an experienced Rangers side who have proven winners in former Breakers and Tall Blacks players Dillon Boucher, Casey Frank and Reuben Te Rangi.

Under head coach Paul Henare, the Sharks have been the most clinical side in the competition and have beaten the Rangers both times this season.

Green is one behind Tab Baldwin who won five with the Auckland Stars.

The fierce rivalry between the Saints and Giants continues, playing against each other in the semi-final for the fifth time since 2008.

Wellington one last year's semi-final against the Giants 89-71, and have had the upper hand winning four compared Giants one which was in 2009.

Nelson are going into the semi ahead of Wellington in the standings, but the Saints did win both regular season meetings.

Match up of the game will be between point guard McKenzie Moore and Lindsay Tait.

Moore has been a top candidate for Most Valuable Player, leading his team in four of the five major statistical categories.

as evidenced by his finals MVP award in last season's championship.

Last season was going to be the swansong for the all-time NBL games leader, Phill Jones, but the 41 year old has returned for another season in the hopes of redemption.

Wellington coach Pero Cameron will coach in his fifth semi-final for the franchise and winning titles in 2010 and 2011.

The Saints have been to eight straight semi-finals, tying the record with the Auckland

Stars and the Giants.