Novak Djokovic is aware of the threat Bernard Tomic poses after the Australian tennis No.1 overcame London's extreme heat and humidity to set up a Wimbledon blockbuster with the world No.1 and defending champion. 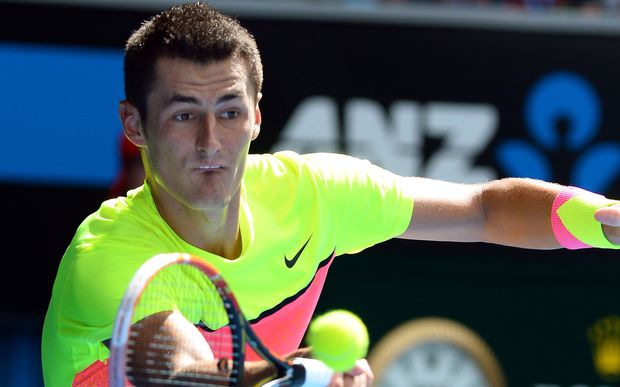 The 27th seed required medical assistance late in the third set but dug deep to book a showcourt meeting Djokovic on Saturday.

Tomic was particularly impressive on serve, not broken once in his two-hour triumph, to leave Djokovic on guard ahead of their second tussle at the All England Club.

The Serb edged Tomic in a tight quarter-final four years ago before going on to lift the trophy for the first time and is expecting another stern test.

"This is the surface that he loves playing the most on. So it's going to be a difficult match," Djokovic said.

"I remember - was it 2011, I think, quarter-finals, we played against each other - four tough sets. So I'm not expecting anything easy there."

Landing 72 per cent of first deliveries, Tomic barely dropped a point on serve in the opening set against Herbert.

He hung tough in the game immediately after seeking treatment at 5-4 in the second set to to hold from 15-40 and secure a two-sets-to-love lead.

The French qualifier needed 21 aces to stay in the fight, but Tomic's class and experience shone through as the world No.27 recovered from 4-1 down in the third-set tiebreaker to live up to his seeding status.

The blazing sun was the least of fourth seed and former champion Maria Sharapova's concerns, however.

"It's much much warmer in my hometown in Longboat Key, Florida," the Russian fourth seed said after subduing Dutchwoman Richel Hogenkamp 6-3 6-1.

What would have concerned her though is her misfiring serves.

The 2004 champion was left red-faced as she fired down three successive double faults to surrender her serve at 4-2 up in the first set but survived that blip to win the eight of the next nine games.

"Everyone was talking about it's hot, it's hot. To me it was just such good weather today," said the 2014 semi-finalist who will next take on Frenchman Richard Gasquet.

Fifth seed Kei Nishikori spared his battered body further punishment after he pulled out of his second-round match against Santiago Giraldo with a calf strain.

Nishikori was not the only one needing medical attention on day three of the championships as a ballboy had to be wheeled off Court 17 after collapsing during American John Isner's 6-2 7-6(8) 6-4 win over Australian Matthew Ebden.

Milos Raonic was kept on Court One longer than he would have liked by the oldest man in the singles draw.

At 37, Tommy Haas proved that his patched-up body still had the ability to fight it out with the best even when he is under heavy bombardment.

Heather Watson made sure Britain did not suffer a wipeout in the women's draw as she made it into round three with 6-4 6-2 win over Slovakia's former world number five Daniela Hantuchova.

Marcus Daniell and his Brazilian partner Marcelo Demoliner beat the experienced Dutch-French combination Robin Haase and Benout Paire in three sets, and Artem Sitak teamed up with the American Nicholas Monroe to beat a German-Austrian combination 10-8 in the fifth set.