Star half-back Shaun Johnson again provided the spark as the Warriors consolidated their position in the National Rugby League's top eight with a 30-8 win over Canberra in Auckland. 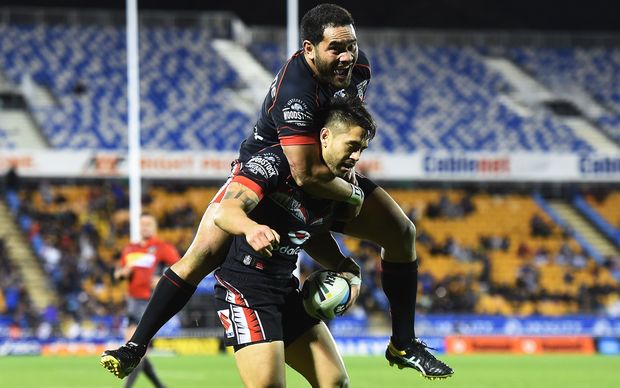 It was Johnson, with his speed and step, who scored the try that gave the Warriors breathing space early in the second half of last night's clash.

He then set up Tuimoala Lolohea for the winger's second touchdown with a kick into the in-goal.

Winger Manu Vatuvei added the icing with four minutes to go by pulling in a lobbed pass from opposition half-back Sam Williams for his 11th try of the season.

It was also Vatuvei's 14th try in his past seven matches against Canberra.

The win is the Warriors' fifth in a row over the Raiders, who remain in the bottom half of the table ahead of a bye for both teams.

The Warriors are in seventh place.

The home side dominated possession and produced plenty of offloads as they forced the Raiders to make more than 400 tackles for the second weekend in a row.

They followed their performance in their win over Gold Coast with another controlled start.

They got a reward in the 11th minute when second-rower Bodene Thompson marked his 100th NRL match by busting the line to dot down.

Canberra had been starved of good field position but made their first incursion into the Warriors 20-metre zone tell.

Jarrod Croker landed the conversion and then nudged the visitors ahead with a penalty.

The Warriors regained the lead on the half-hour, blockbusting centre Konrad Hurrell taking on three defenders before off-loading to Lolohea to score.

Johnson added the extras then a penalty after the half-time hooter for a 14-8 lead.

The Raiders' defeat was compounded by injury, with winger Jordan Rapana limping off before half-time.