The Wellington round of the World Rugby Sevens is to move to a Saturday-Sunday format and will be played at the end of January. 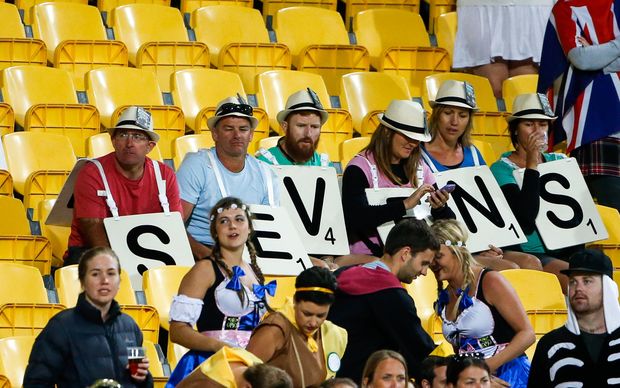 Some of the crowd at the Sevens spell it out Photo: Photosport

The event is teaming up with the Wellington Cup race meeting.

Next year the Wellington Cup will be raced at Trentham on Saturday January 23rd on Wellington Anniversary weekend and the Wellington Sevens will be the following weekend on January 30th and 31st.

The Sevens has usually been played on a Friday and Saturday in early February.

This year's sevens tournament failed to sell out and organisers have been looking to reinvigerate interest with the contract for the tournament up in 2016.

Wellington Racing Club Vice President and Mayor of Upper Hutt Wayne Guppy says the two organisations had been looking at ways to work more closely together for some time.

Sevens Wellington General Manager Steve Dunbar says the two organisations will offer joint package options so Wellingtonians and visitors could make the most of the sport and fun.

The 2016 event is likely to include a number of All Blacks as they push for Olympic spots in the sevens team.