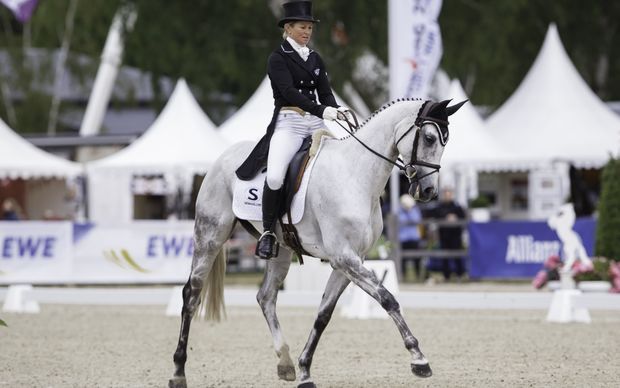 "I was surprised how well she did today. She can be quite difficult and it took me a lot of time and work to get her on my side," she said.

"I knew she had all the potential to do an exceptional test, but she has never been this consistent before. This is only her second four star - event after Pau, so I am hoping for a nice round tomorrow. She has a big jump in her and is super - fast, so the course should be very well suited to her."

Julien Despotin (BEL) and Waldano lead the four star on 31.9, with Ingrid Klimke (GER) and FRH Escada JS just behind on 32.7.

Sir Mark Todd is the next best of the Kiwis in 7th with 36.5 penalties on NZB Campino

New Zealandes Jesse Campbell and Kaapachino are in eighth on 36.8 two places ahead of his compatriot Lizzie Brown on Henton Attorney General on 38.2.

Campbell and Brown are both on début at four star level.

Saturday will see the start of the cross country phase, in which designer Captain Mark Phillips has reversed the direction of the course this year.