Just when it seemed safe for Rafa Nadal devotees to peer up from behind the couch, the Spaniard suffered another horror show at the hands of Ukrainian spin wizard Alexandr Dolgopolov at Queen's Club. 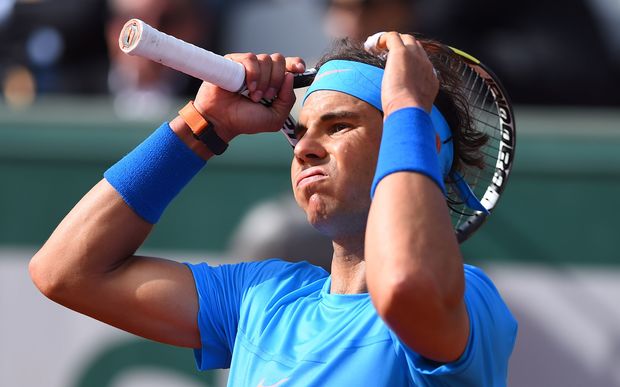 Former world No.1 Nadal looked rejuvenated last week when he won the Stuttgart grasscourt title, having endured a title-less run on his beloved European claycourts and arrived at the Aegon Championships with a spring in his step.

But the form the 14-times grand slam champion displayed in Stuttgart was only fleetingly in evidence as he went down 6-3 6-7 6-4 to a player ranked 79th in the world.

Despite a dispiriting loss in front of Spain's former king Juan Carlos, who was sat in the front row, the 29-year-old tried to remain positive with Wimbledon a little under two weeks away.

"This week I lost an opportunity, but I am playing better than before, and enjoying more on court than before," he told reporters. "Today I lost. I accept. I keep going. I'm going to practise hard. I hope to be ready to play well in Wimbledon."

Fifth seed Nadal, who won the Queen's title in 2008, but has stayed away in recent years because of gripes with the British tax system, saved two points that would have seen him trail 4-0 but he could not claw back the opening set.

The Mallorcan survived a match point in the second set tiebreak with a swinging serve and levelled it when Dolgopolov missed an attempted pass, celebrating with a trademark upper-cut.

Dolgopolov boasts a richer variety of spin than an election campaign manager and a curious backhand sidewinder that can bamboozle opponents but he paid for being too clever with an attempted drop shot and surrendered serve at 1-1 in the decider.

Nadal looked in control but he loosened his grip at 4-3 and Dolgoplov levelled with an angled volley.

Even then Nadal has an immediate chance to break again, but missed a bread and butter forehand with the court begging.

Dolgopolov then pounced, belting a backhand return winner and then threading a forehand down the line to seal a second consecutive victory against Nadal.

Top seed and home favourite Andy Murray got in the Wimbledon spirit by donning a pristine all-white kit in a 6-4 7-5 defeat of Taiwan's Lu Yen-hsun, a player he beat on the way to winning the title at the All England Club in 2013.