The New Zealand women's football team have been knocked out of the World Cup after drawing 2-all with China in their final group match. 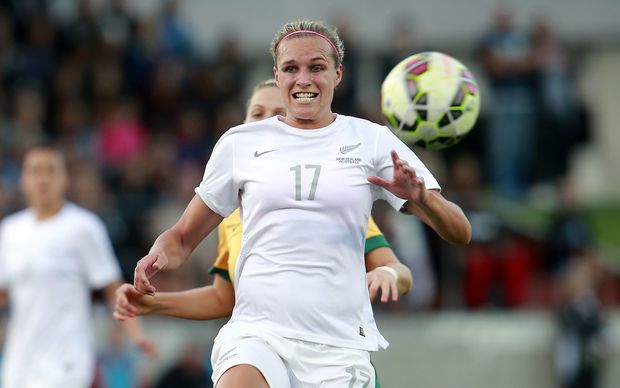 Hannah Wilkinson in action for the Football Ferns Photo: Photosport

Following a 1-nil loss to the Netherlands and a nil-all draw with hosts Canada, the Football Ferns needed a win against China to progress to the knockout stages.

New Zealand started strongly in front of a crowd of 26 thousand at Winnipeg stadium by scoring their first goal at the tournament in the 27th minute.

Defender Rebekah Stott speared a loose ball into the goal following a corner.

China equalised from the penalty spot four minutes before halftime when Betsy Hassett blocked a ball with her chest and was harshly judged to have handled the ball.

Lisi Wang made no mistake from 12 yards.

The Chinese then went ahead on the hour mark with striker Shanshan Wang beating Erin Nayler to an enticing cross on the counter attack, but Hannah Wilkinson restored parity three minutes later, scrambling the ball home after Amber Hearn headed an Ali Riley cross back across goal.

New Zealand pressed for the winner late in the game, spurred by player of the match Annalie Longo, who played through to the final whistle with a suspected broken bone in her foot.

There was more drama late in the match with the Chinese coach sent from the field for interfering with Ria Percival as she tried to take a quick throw.

After the match head coach Tony Readings said they had done everything they could and that the game was ultimately decided by an 'uncontrollable.'

"It's the third game in a row where we've said the same thing. The performances we've put in haven't got the results we deserve in this group.

With Canada and the Netherlands also drawing, 1-1 in Montreal, China finish in second place behind the hosts while the Dutch are almost certain to join them in the knockout stage as one of the four best third-placed teams.

Readings vowed that the Football Ferns would deliver on the promise they showed in Canada next year in Rio.

"This team has massive potential. Despite the fact we've got a few centurions, two of them are 25 years old and we're going to have the core of them at the Olympics and even the next World Cup."