One of the greatest race horses New Zealand has produced, Bonecrusher, was put down in Auckland on Thursday morning after a lengthy illness.

The biggest disappointment of his career came at the 1986 Japan Cup, when he was the overwhelming favourite to win but had to be scratched because of a lung infection.

Trainer Frank Ritchie said it was disappointing Bonecrusher did not get to make his mark on the world stage. 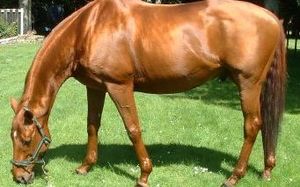 "Bonecrusher, I believe, would have won that Japan Cup. I know it's easy to say that but his work had been sensational before he got the lung infection and it was a huge disappointment.

"It would have put him on the world stage and from the horse's point of view that's what disappointed me the most."

Ritchie said, personality-wise, Bonecrusher was generally a kind horse but knew he was something special and could be a bit aloof.

"He got a bit sick of human company from time to time... and there were certain times of the day we would leave him alone."

Bonecrusher has been buried at Ellerslie Racecourse in Auckland.