Former All Blacks enforcer Jerry Collins has died in a car crash in France at the age of just 34.

Collins, who was playing in French rugby, was killed along with his partner in the accident on the A9 motorway near Montpelier. The couple's young daughter is in hospital. 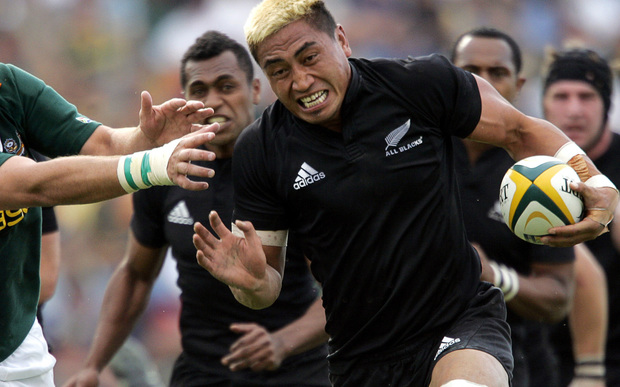 Jerry Collins fends off a tackle during a match against South Africa in 2006 Photo: AFP

Collins played 48 Tests for the All Blacks as a blindside flanker, captaining the team three times and scoring five tries.

He was reknowned for his hard tackling. Collins once remarked that he wouldn't want to be tackled by him either.

He debuted for Wellington in 1999, winning the national provincial championship the following season before debuting in Super Rugby for the Hurricanes in 2001. He played 74 times for the Wellington-based franchise with his final season coming in 2008.

Collins played in France, Wales and Japan after leaving the Hurricanes. He turned out for rich southern French club Toulon in 2008-09 then played for Welsh team Ospreys for two years.

Then it was off to Japan for a stint with Yamaha in the Top League, while he was back in France playing with Racing Club Narbonne in what was thought to be his final season in professional rugby.

Collins, who's a cousin of former All Blacks captain and Hurricanes team-mate Tana Umaga, made headlines in 2013 when he was arrested in a Japanese department store for carrying a knife, which it was claimed was for self-defence.