Adam Voges has become the oldest player to score a century on debut as Australia seized control of the first cricket test against the West Indies on the second day in Dominica. 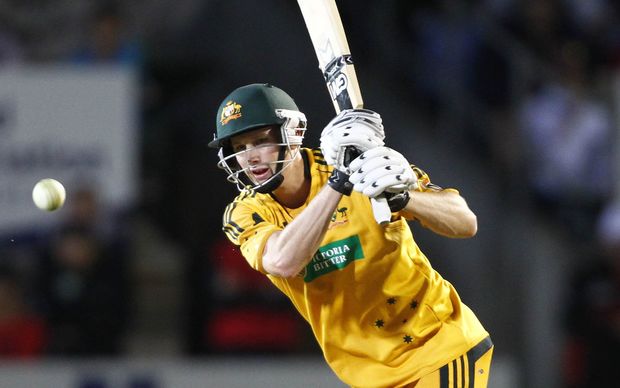 Voges made an unbeaten 130, combining with number 11 Josh Hazlewood to break the spirit of the West Indies by adding 97 runs for the final wicket at Windsor Park to turn a tight contest turned into a probable rout.

Australia were dismissed for 318 in their first innings, a lead of 170 runs.

They inflicted more misery on the hosts by picking up two wickets to put the West Indies in trouble at 25 for two at stumps, trailing by 145 runs with eight second-innings wickets in hand.

Voges's score was the highest in a test in Dominica.

At 35 years and 243 days, he surpassed the previous oldest player to notch a debut century, Dave Houghton of Zimbabwe, who was 35 and 118 days when he accomplished the feat against India in Harare in 1992.

Voges forced his way into the Australian team by averaging 104 in the Australian domestic season and his excellent test debut suggested he will stay in the team for the looming Ashes series in England.

He was rarely troubled by the West Indies attack which apart from outstanding leg-spinner Devendra Bishoo was abysmally sub-standard for test level.

Bishoo often bamboozled the Australian batsmen with prodigious turn on a dry pitch to post career-best figures of six for 80.

The pick of his wickets was the one that bowled Australian wicketkeeper Brad Haddin.

Two balls after being hoisted for six, Bishoo got revenge with a delivery that pitched on leg stump and turned sharply to clip Haddin's off peg.

The ball, compared with former Australian great Shane Warne's famous "ball of the century" that bowled England's Mike Gatting at Old Trafford exactly 22 years ago to the day, left the visitors reeling at 126 for six.

But Australia added 192 for the last four wickets, helped by a cut finger which forced Bishoo to twice leave the field for treatment.

The West Indies faced long odds at the start of their second innings and their predicament deteriorated when openers Shai Hope (2) and Kraigg Brathwaite (15) were dismissed in consecutive balls, Hope by Mitchell Johnson and Brathwaite by Mitchell Starc.