New Zealand cricket captain Brendon McCullum hailed his team's slip-catching after they completed a clinical 199-run victory in the second test against England to draw the series 1-1. 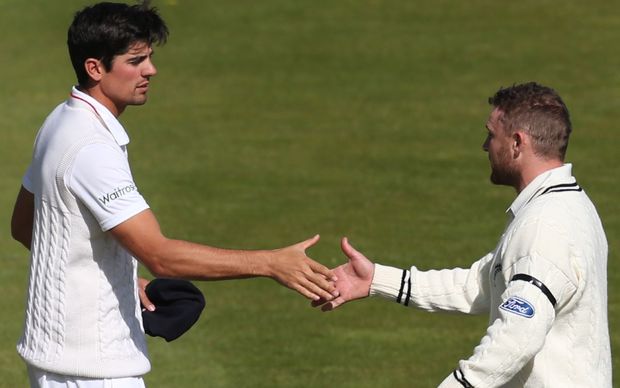 The Black Caps were inspired in the field on the final day, bowling the hosts out for 255 to seal their fifth test win in England and first since 1999.

"Right throughout the series, I thought our slip catching was brilliant," McCullum said at the presentation ceremony.

"The energy in the field was there even when we were behind in the series. It's not easy to bounce back having lost having played pretty well," McCullum added.

"England dominated for periods but we had to hang in and the ability to bowl last on what I thought was a very good cricket wicket was a great asset."

England captain Alastair Cook said it had been an enjoyable series to play in.

"The spirit from both teams has been fantastic," Cook told the BBC. "The ball was turning and that four-wicket burst really hurt us.

"Even when we did pitch it up, they hit us over our head. It was a tough situation to bowl in. Credit to the way New Zealand played in this second innings, we had chances in both these games."

"NZ thoroughly deserved to win this game," he said.

"I think the positive way they play, the way they punished our bowlers and put them under pressure is something we need to take from the way they play," added Farbrace who will hand over the head coaching role to Trevor Bayliss for the Ashes series starting in July.

"Their bowlers were very disciplined and put our batters under pressure."

Left-arm seamer Trent Boult was named New Zealand's man of the series after taking 13 wickets in the two matches.

"It's a very special victory here to turn it around from Lord's," he said.

"We took a lot of positives from there. The batters played tremendously well here and we got it in the right areas with the ball. The conditions helped too."