The Black Caps captain Brendon McCullum and coach Mike Hesson said they're "honoured and humbled" to be named in the Queen's Birthday Honours List. 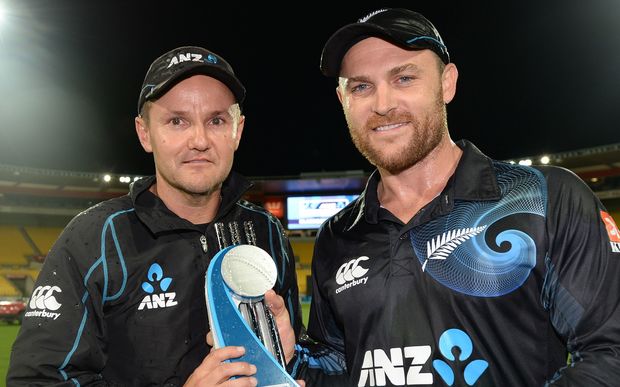 The New Zealand coach Mike Hesson and captain Brendon McCullum pose for a photo after a series win over India. Photo: PHOTOSPORT

McCullum and Hesson were both appointed Officers of the New Zealand Order of Merit (ONZM) for Services to Cricket.

The pair have been the captain and head coach, respectively, of the the Black Caps since 2012.

They led the Black Caps to a Cricket World Cup Final for the first time at the recent tournament in Australia and New Zealand, and to an unprecedented five Test wins in the 2014/15 season.

Hesson said he hoped the honours would be seen as recognition for the entire New Zealand team, both on and off the field.

"We front the team from a coach and captain's perspective, but we wouldn't be here receiving this honour without a very good group of cricketers and really good support staff around us."

"I feel honoured, privileged and surprised."

Hesson paid tribute to McCullum for his leadership and contribution to the game in New Zealand over the past 13 years.

"Brendon is the face of the team. He is the guy who makes the key decisions out on the field."

"He's captured a nation not only with his style of play, but with the way he's encouraged his teammates to embrace the game in terms of passion and spirit.

"It is very deserving."

McCullum hoped the accolades would be good for the game in New Zealand.

"You try to make an impact on the sport while you have the opportunity, and to leave it in a better space than when you started."

"Hopefully, these honours show we're all moving in the right direction together - team, support staff, NZC and all New Zealanders who love the game."

He said he was especially pleased to see Hesson recognised.

"Mike's the person who's pulled this all together. The progress we've made over the past couple of years has a lot to do with his skills, work ethic and, not least, foresight."

"He isn't recognised enough for his role in the revival of New Zealand cricket - and hopefully this will go some way to addressing that."

To be an Officer of the New Zealand Order of Merit (ONZM):

Mike Hesson, 40, has coached cricket for 20 years, having initially represented Otago B as an opening batsman. In 1998 he was the youngest person to attain a New Zealand Cricket level three coaching qualification and soon afterwards became coaching director at Otago Cricket for five years. In 2003 he was appointed by the International Cricket Council as national coach of Argentina. He was then selected as coach of the Otago Volts first-class side, achieving titles in the one-day competition in 2008 and Twenty20 in 2009. Hesson later accepted a contract as national coach of Kenya before his role as head coach of the Black Caps.

Brendon McCullum, 33, made his Test debut for New Zealand in 2004 against South Africa and his One-Day International debut against Australia in 2002. He is the leading career runscorer in Twenty20 International cricket and is the first, and so far only, player to have scored two Twenty20 International centuries and 2000 runs. In 2014 he scored 302 runs in a Test against India, making him the first New Zealander to score a triple century in Test cricket, and is the second highest career runscorer, after Stephen Fleming, in the history of New Zealand Test cricket.