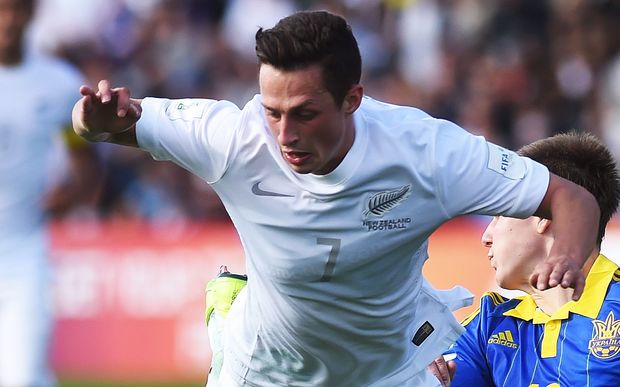 Joel Stevens flies through the air as he is tackled by Eduard Sobol during the FIFA U20 World Cup match, New Zealand Junior All Whites v Ukraine. Photo: PHOTOSPORT

Following a FIFA executive committee meeting, Blatter said football's governing body would not make any changes to the allocation of World Cup slots among the six continents for the 2018 and 2022 tournaments in Russia and Qatar.

The decision leaves Oceania without a guaranteed place, with the top side in the region having to playoff with a team from another continent.

In his acceptance speech after being re-elected, Blatter promised to fight for the upgrade of South American and Oceania playoff places to full World Cup qualification slots.

New Zealand is a part of the Oceania Confederation and the chief executive of New Zealand Football Andy Martin said he was hopeful Oceania would get an automatic berth.

A half place means that the team in question has to play off over two legs against a team from another continent for a place in the finals.

That has proved a difficult task in the past, with New Zealand losing 9-3 on aggregate to Mexico in a two-leg playoff for a place in Brazil.

"The same distribution has been accepted by everyone although some were more grumpy than others," Blatter told reporters.

UEFA president Michel Platini warned that cutting the number of European teams at the finals was "a red line that must not be crossed".

The decision was good news for South America which had feared losing half a place despite a good performance in Brazil last year, where five of the continent's six teams got past the second round.

In October 2013, Blatter had said that he wanted Africa and Asia to have more places.

In April, he said that CONCACAF should have four full places rather than 3.5.