New Zealand have drawn 0-0 with Ukraine in the opening match of the Under-20 football World Cup at North Harbour Stadium in Auckland. 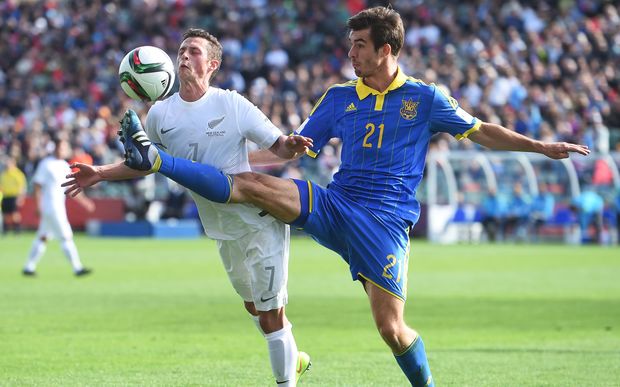 Action from the opening match of the under 20 FIFA World Cup, 2015. Photo: PHOTOSPORT

In front of 25,000 fans, the Junior All Whites had six chances to score, but only one shot was on target.

In contrast, Ukraine had 17 shots, three of which were on goal.

Ukraine created the best opportunity of the opening 45 minutes via the counter attack as the ball was worked into the New Zealand area in the 14th minute where goalkeeper Oliver Sail parried a strongly struck shot away to safety.

Alex Rufer headed the Junior All Whites' best chance of the half over the bar in the 20th minute.

But New Zealand had their two best chances in the game in the second half. Standout midfielder Clayton Lewis narrowly shot over the crossbar shortly after half-time, while centre back Sam Brotherton headed wide from an injury time free kick.

Brotherton looked distraught on the field after missing what would've surely been the match-winner, but he was philosophical afterwards. "The ball was put into the box, bobbled around a little bit but it fell onto my head, just did my best, couldn't direct it into the goal - just wasn't meant to be today," he said.

The best of Sail's three saves came in the 58th minute, the tall keeper diving down to his right to hold a shot from the angle.

Coach Darren Bazeley was delighted to get a point, albeit with a tinge of regret that his charges couldn't push on and get that historic first-ever win at an Under-20 men's World Cup.

"You know we're on the board with a point and it's our first clean sheet for a couple of years. The boys put a lot of effort into this game to get out that reward. Could it have been three points? It was close."

The only real concern for the hosts will be captain Bill Tuiloma's groin niggle - the Olympic Marseille midfielder left the field with nine minutes remaining, but Bazeley says he's confident Tuiloma will be fine for New Zealand's next pool game.

That's against the USA on Tuesday at the same venue. The Junior All Whites' final pool game is against Myanmar on Friday in Wellington.