Opener Tom Latham and debutant Luke Ronchi lifted a New Zealand side bristling with attacking intent to 297 for eight at stumps on a rain-disrupted first day of the second cricket Test against England in Leeds. 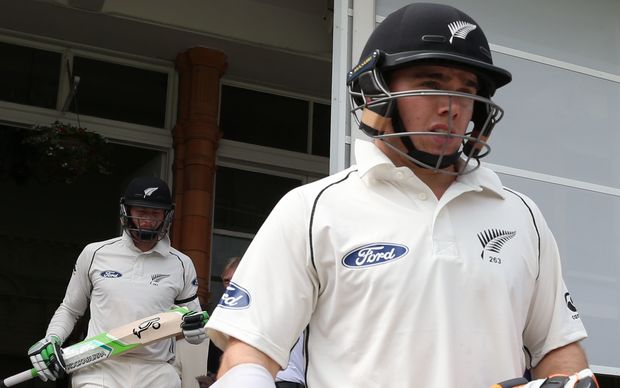 Latham made 84 and wicket-keeper Ronchi a sublime 88 in his first test for New Zealand, the pair sharing a sixth-wicket partnership of 120 to help their side recover from a dire start after losing the toss.

The England paceman James Anderson had opener Martin Guptill caught at slip by Ian Bell for a duck in the third over to claim his 400th test wicket.

Two balls later Kane Williamson edged the fast bowler to wicketkeeper Jos Buttler to leave the touring side reeling before Latham and Ross Taylor shared a fluent third-wicket partnership of 66 in between the showers.

Taylor was lbw to Stuart Broad for 20 but New Zealand captain Brendon McCullum made his intentions clear by smashing the same bowler over extra cover for six off the first ball he faced.

Latham completed a classy fifty, including eight fours, while McCullum flayed six fours to get to the tea interval on 41 not out off 27 deliveries with New Zealand on 123 for three.

Resuming after the break McCullum drove England's New Zealand born all-rounder Ben Stokes's first ball of the final session straight to Mark Wood at mid-off and BJ Watling was bowled by Wood for 14, bringing Ronchi to the crease on his test debut at the age of 34.

Timing the ball sweetly, he raced to his fifty off 37 balls, reaching the milestone with a slog sweep for six.

Latham, meanwhile, was leading a charmed life and was dropped twice off successive balls as well as surviving a huge shout for lbw.

He was spilled again by England captain Alastair Cook off Broad and a vibrant sixth-wicket partnership moved past 100 off 127 balls.

Latham's luck finally ran out when he edged Broad to Joe Root at slip with the total on 264 and Ronchi hooked Broad straight to Anderson at long leg.

Ronchi faced 70 balls, hitting three sixes and 13 fours in the second fastest fifty ever scored by a player on his test debut.

Tim Southee was well caught by Adam Lyth on the mid-wicket boundary off Wood for one but Mark Craig (16 not) and Matt Henry (14 not out) got through to the close unscathed.

England, building up for the Ashes at home, lead the two-match series one-nil after winning the first test by 124 runs at Lord's.

The Black Caps all-rounder Corey Anderson was ruled out of second match after failing to recover from a back injury which he suffered in the first Test.