England capped a remarkable comeback to beat New Zealand by 124 runs on the fifth and final day of the first cricket test at Lord's. 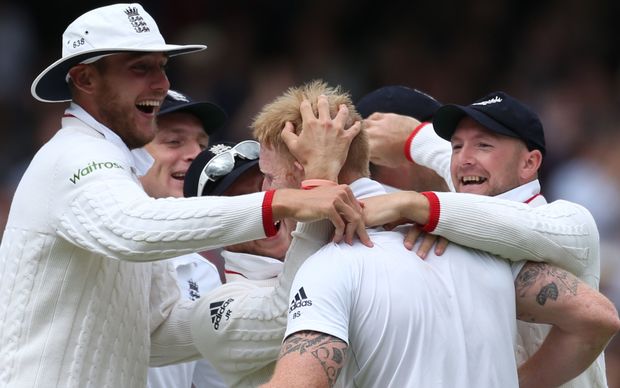 Having been set 345 for victory, the Black Caps run chase started in disastrous fashion with openers Martin Guptill and Tom Latham both dismissed without a run on the board.

BJ Watling and Corey Anderson managed half centuries but captain Brendon McCullum failed to trouble the scorers with New Zealand all out for 220, with Stuart Broad and New Zealand born all-rounder Ben Stokes picking up three wickets each.

The New Zealanders were left needing to post a new Lord's record to win the match after being set a victory target of 345.

The Black Caps bowled England out for 478 in their second innings after the hosts resumed on day five on 429 for 6.

James Anderson and Stuart Broad then gave England hope of a sensational victory as the Black Caps top-order collapsed.

Both New Zealand openers were out for a duck, and they were 12 for three when Ross Taylor was dismissed.

Martin Guptill was caught in the slips off the second ball of New Zealand's chase and the tourists were still on nought when Stuart Broad's first ball of the second over had Tom Latham lbw for a golden duck.

The Black Caps last-wicket-pair of Matt Henry and Trent Boult battled valiantly for eight overs but were left needing to survive another 10 to salvage a draw.

The Black Caps have now won just one test at Lord's in 17 attempts and remain without a test win in England since 1999.

The second and final test is in Leeds starting on Friday night.