The New Zealand golfer Danny Lee has climbed into a tie for sixth after the second round of the latest PGA Tour event in Texas. 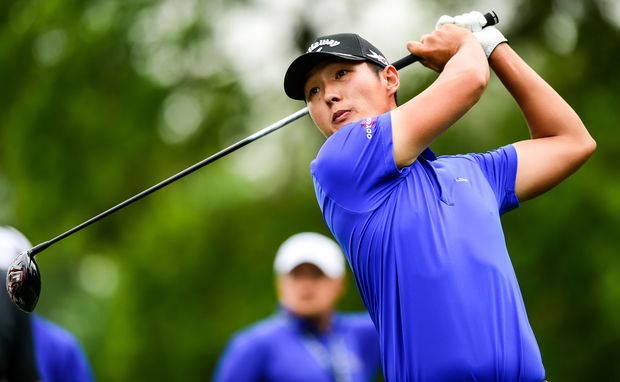 Following his four under par first round 66, Lee's figures were again in the red on day two with a one under par 69.

The Rotorua player moved from seventh up to sixth as the Masters champion Jordan Spieth imploded late and Kevin Na withstood tough, rainy conditions to hold a two-shot lead over Ian Poulter.

Spieth's North Texas homecoming took a turn for the worse on Friday as he fell victim to Colonial Country Club's "Horrible Horseshoe" of holes three, four and five.

The 21-year-old world number two started on 10 and had two birdies without a bogey through his first 12 holes and topped the leaderboard at eight-under.

But a bogey at the par-three fourth was followed by a triple-bogey seven at the par-four fifth, and Spieth dropped one more shot at the par-three eighth in a three-over 73 that left him on three-under 137 - seven shots off Na's 10-under total of 130.

Na, who shared the overnight lead with Spieth, Boo Weekley and Japan's Ryo Ishikawa, had five birdies before his only bogey of the day at his final hole in a four-under 66.

That gave him a two-stroke cushion over England's Poulter, who had six birdies in his three-under 67 for 132.

With more severe weather forecast for Saturday afternoon, third-round tee times have been moved up in hopes of getting the round completed before the worst weather arrives.

Poulter heads into the weekend with perhaps something to prove.

The Englishman, who has never won a stroke-play event on the United States, was voted along with Rickie Fowler the most "overrated" players on the PGA Tour in an anonymous poll of players conducted by Sports Illustrated last month.

Fowler responded by winning the Players Championship two weeks ago.

"He's taken care of his business. It's time for me to take care of mine," Poulter said.

A win this week would also justify Poulter's decision to forego the European Tour's flagship event at Wentworth this week.

That move sparked some criticism in Europe, although he'll be able to fulfill his European Tour requirement regarding home tournaments at the new British Masters in October.