The New Zealand sailor Josh Junior has won silver at the 2015 Finn European Championships which concluded with an exciting medal race in Split, Croatia. 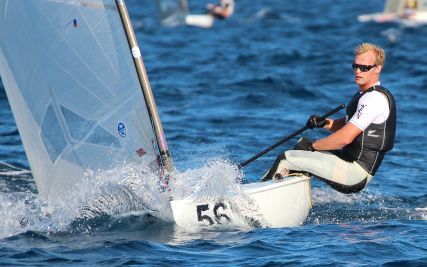 After the penultimate day just two points separated Junior and local Croatian sailor Ivan Kljakovic Gaspic, with a wide points gap back to 3rd, setting the scene for a dramatic final race battle between the two front runners.

Light winds kept the top ten ashore until late in the day and the medal race finally got underway just before the deadline with a 10 knot breeze.

Initially Junior had the upper hand, but then let the Croatian escape and when they came back together at the top, Gaspic had a very small lead that he capitalised on to cross in fourth to take the title.

Junior finally crossed in eighth to take the silver.

Three race wins and more top ten race finishes on his score-card over the opening five days put Junior in with a good shot at the overall title, however Gaspic, a three time Finn European Champion, had the better performance on the final day.

The result cements what has been an excellent start to Junior's 2015 European campaign. Gaining valuable top quality medal race experience he placed 7th at 2015 Princess Sofia Regatta in March, then 8th at ISAF Sailing World Cup Hyeres in April.

Junior switched from the Laser class to the heavy-weight Finn during 2012, and one of his best previous results in the class was a 5th at the 2014 Finn World Championship.

In November the Finn class will contest their 2015 World Championship - known as the Finn Gold Cup - in New Zealand with Takapuna Boating Club set to host the world's best in the Olympic heavy-weight dinghy class.