The Juventus defender Patrice Evra says he will shake Luis Suarez's hand before the Champions League football final with Barcelona despite their troubled past over a racism row.

Suarez was banned for eight matches after being found guilty of racially abusing Evra four years ago during their time at Liverpool and Manchester United respectively.

The two then refused to shake hands in one further meeting between the sides, but Evra insists he will put that behind him when they come face-to-face in Berlin next month. 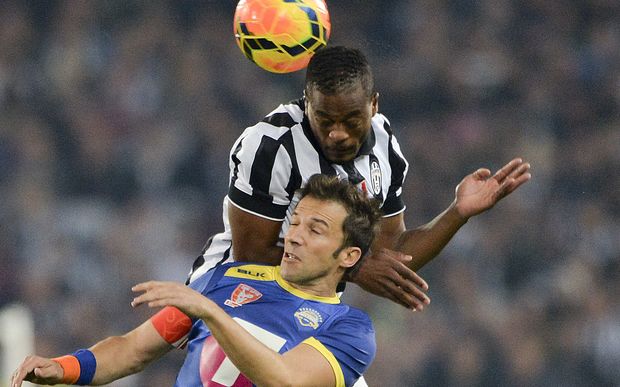 Patrice Evra of Juventus climbs above Alessandra Del Piero in an A League All Stars match. Photo: Photosport

"I am proud to be what I am, I am proud about my colour and I will shake his hand, it is no problem, but I will make sure he will feel me on the pitch," said the Frenchman.

Barca are the favourites to win their fifth European Cup with their star front three of Suarez, Lionel Messi and Neymar having scored 114 goals between them this season.

However, despite it being Juventus's first Champions League final in 12 years, Evra believes they have the experience to stop Barca's progress towards a treble.

"People forget Juventus is a team with a lot of players that have already won the Champions League. They played in other finals too, like myself, this is my fifth final," he said.

Juventus booked their place in the final with a 1-1 draw at Real Madrid on Wednesday to seal a 3-2 aggregate win over the holders.