Halfback Gillies Kaka, a key member of the All Blacks Sevens, will return to the side for the final two tournaments of the world series.

Kaka hasn't played since injuring his hand at the Las Vegas Sevens.

"Gillies has a big influence on the way we play and with Beaudein Waaka it gives us huge depth in the crucial position of half back," said coach Gordon Tietjens. 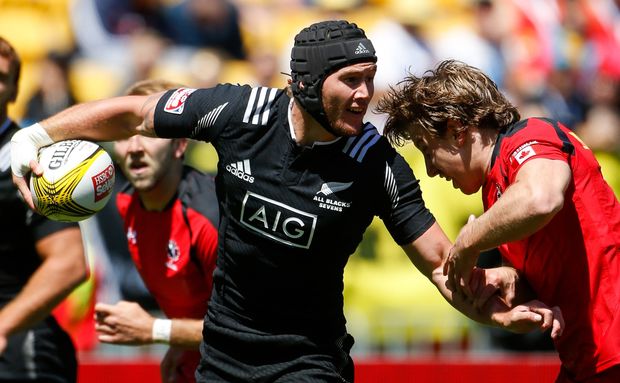 All Blacks Sevens halfback Gillies Kaka is back from injury. Photo: Photosport

Tietjens said the team wanted to end the season with top performances in Glasgow and London after finishing a disappointing fifth in Tokyo, but faced a challenging pool in Glasgow, having to play Kenya, Samoa and series leader South Africa.

Bustling Counties Manukau back Sam Vaka is also back after being injured in the National Sevens tournament in January.

He earns a recall having last played in the Port Elizabeth tournament last December.

"Sam's a powerful player, strong in contact and very quick. He's someone who gives it his all when he plays in the black jersey so we're looking forward to him performing well in Glasgow."

New Zealand currently lies third in the series behind Fiji and South Africa, but has won just one tournament this season.

The top four teams automatically qualify for the 2016 Olympic Games.

Tietjens said the side had a one day camp in Auckland last week and had trained hard since assembling in Mt Maunganui on Sunday.

"We've really lifted the intensity in everything we do. Collectively we're a lot fitter and better conditioned so we're in the right shape do well in the next two tournaments.

"We finished last season by winning the last two tournaments. But this will be tougher. We're sitting third on the table, but we can bounce back and we've been in this situation where at the death we've won another World Series so it's a challenge for us and I am hoping we really perform."

The Glasgow tournament begins on May 9th.