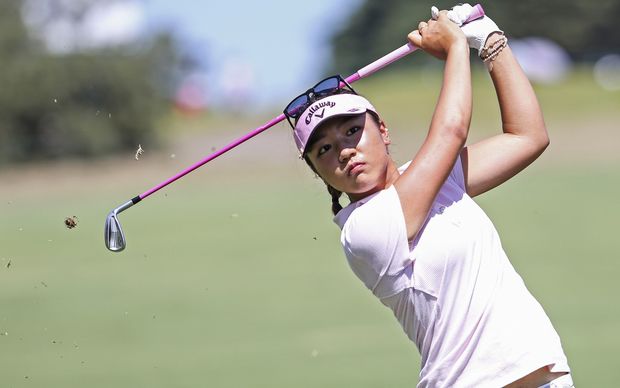 Ko started the last day three strokes off the lead but she shot a two under par 70 fourth round with six birdies and four bogeys, while Pressel had a par 72, missing her own birdie on the 18th - which would have handed her the win.

Both players finished on eight under after the 72 holes.

Last year's victory at the Swinging Skirts Classic was Ko's first as a professional on the LPGA Tour. In addition to her seven LPGA triumphs, she's now won nine professional tournaments, including two LPGA titles as an amateur.

Five of Ko's seven LPGA Tour victories have now come when she's trailed entering the final round and she is now 2-0 in playoffs after winning a three-way, four-hole playoff at the CME Group Tour Championship a year ago.

While she seems very calm on the course Ko says she does get nervous.

"Yeah, you know, I think everybody has nerves. Some people show it; some people don't. But to me, even just playing a round of golf with club members gets me nervous. I know I've got the nerves. If some people think I don't look like I am nervous, then it's a good thing."

Meanwhile fellow Aucklander Michael Hendry's finished in a tie for 31st at the China Open with a final round 74.

Hendry was nine shots behind the winner, China's Ashun Wu.

Rotorua's Danny Lee climbed as high as third before a mixed final round meant he finished tied for 22nd at the latest PGA Tour event in New Orleans.