The Ethiopian runner Lelisa Desisa and Kenya's Caroline Rotich were the top male and female finishers at the Boston Marathon, two years after the race was struck by a deadly bombing attack. 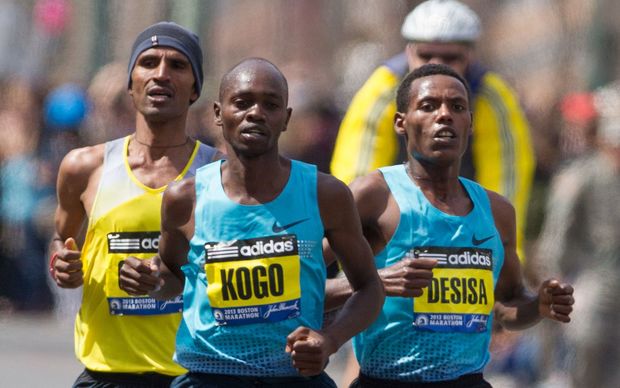 Desisa, who famously gave his winner's medal to the city following the 2013 attack, pulled ahead of all rivals to sprint down Boylston Street alone, finishing with a time of 2 hours, 9 minutes and 17 seconds.

"Strong Boston!" Desisa shouted after he crossed the finish line, in a version of the "Boston Strong" motto that became the city's rallying cry after the April 15th, 2013, attack that killed three and injured 264.

Kenya's Rotich had a more dramatic finish, beating Ethiopia's Mare DiBaba in a sprint down Boylston Street, turning in a time of 2 hours, 24 minutes and 55 seconds.

Desisa unseated reigning champion Meb Keflezighi of California, whose 2014 victory marked the first time that a U.S. man had won the race in three decades.

The elite men's and women's fields kept large packs for the first half of the race, with runners mindful of the early breakaway that set the stage for Keflezighi's 2014 victory.

The race was run during a pause in the trial of Dzohkhar Tsarnaev, convicted this month of killing three and injuring 264 in the 2013 bombing of the elite race.

Prosecutors and defense attorneys are due to begin presenting another series of witnesses before the jury decides whether Tsarnaev will be sentenced to death or to life in prison without possibility of parole.