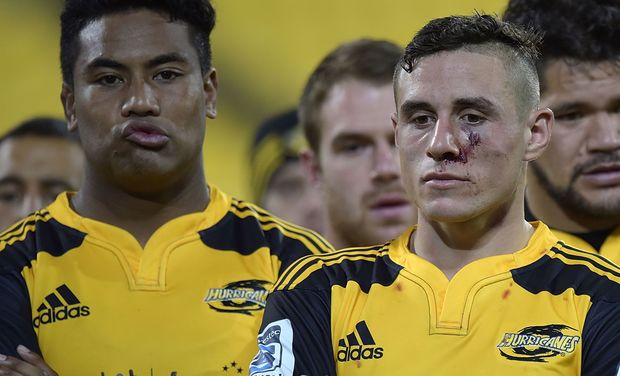 The Hurricanes' unbeaten run has ended after losing to the Waratahs 29-24 in Wellington.

Undefeated this Super Rugby season through seven games, the home side failed to beat the defending champions and set a new record for consecutive victories at the franchise.

The match was a milestone for the All Black lock Jeremy Thrush who was playing in Hurricanes colours for the 100th time, but he wouldn't saviour the century with a win.

Both teams were rewarded with a bonus point for scoring four tries, which would have been five for the home team had flanker Ardie Savea not inexplicably dropped the ball over the try line after an impressive break in the the 3rd minute.

The Waratahs opened the scoring 10 minutes later with a try to winger Peter Betham.

Playing on the edge of an all Wallaby backline, Betham finished a fierce passage of attack that stretched the Hurricanes' defenders thinly across the park. 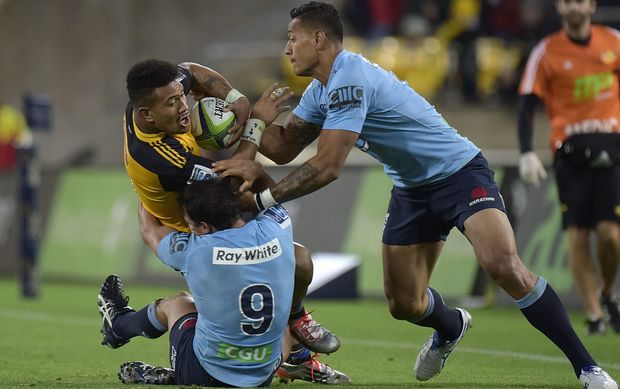 Ardie Savea is warpped up by Bernard Foley and Irael Folau. Photo: PHOTOSPORT

After a checkered start to the season, the visitors were playing with renewed venom, relentlessly pressing the line with their oversized pack and rushing up on defence to shut the opposition down.

It was this rush defence that led to the Hurricanes' first try.

Referee Glenn Jackson caught the Waratahs offside at the end of the first quarter and the home captain Conrad Smith chose to set a scrum five metres from the line.

Smith then skipped over unmarked on the blindside to score the easiest of tries, after receiving half back TJ Perenara's pass from the base.

Beauden Barrett converted to level the scores and then scored a brilliant try of his own a minute later.

The All Black fortuitously gathered the ball from his own chip kick and then showed his deceptive pace over an 80 metre sprint.

The Waratahs' man mountain Will Skelton replied in the 33rd minute, the big lock rewarded for several rampaging runs and proving unstoppable close to the line.

Brad Shields scored for the Hurricanes five minutes later, but with half time approaching Betham intercepted a forced pass to level the scores 19-all.

The Waratahs had the team on top of the table in their sights and scored first after the break through fullback Israel Folau after the Hurricanes' defence was again stretched past breaking point.

First five Bernard Foley converted and then kicked a penalty to give the visitors a 10 point buffer with 24 minutes remaining.

Perenara sniped around the side of a ruck to get the Hurricanes within five, but the Waratahs had come to Wellington to prove they're capable of defending their title.