The Chiefs have beaten the Crusaders 26-9 in their Super Rugby derby in Christchurch, but a knee injury to Aaron Cruden dampened the visitors' celebrations. 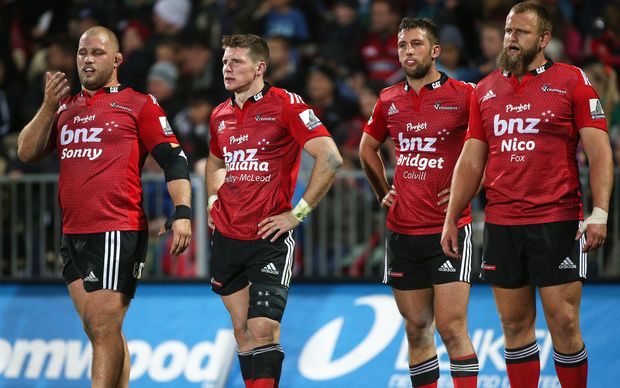 It wasn't a night to remember for the Crusaders Photo: Photosport

Cruden limped off in the 19th minute after injuring his left knee and couldn't continue.

The win sees the Chiefs move up to first place on the Super Rugby table, overtaking the Hurricanes - although the Wellington-based side have two games in hand on the Waikato-based franchise, including tonight's visit by the champion New South Wales Waratahs.

The Chiefs scored three tries to none for an error-ridden and profligate Crusaders side, who could only notch three penalties to Cruden's World Cup competitor, Daniel Carter.

Cruden had received some treatment on the pitch but could barely put any weight on his left leg and when the 26-year-old tried to change direction while walking, he collapsed on the turf again and was immediately replaced by Andrew Horrell.

The victory moved the Chiefs to first in the New Zealand conference and top of the table on 32 points, but they have played two more games than the unbeaten Hurricanes (31), who play the New South Wales Waratahs on Saturday.

The Chiefs' defensive line speed and work at the breakdown was exemplary as the Hamilton-based side turned what opportunities they had into points.

After Cruden and Tim Nanai-Williams had given the Chiefs a 6-3 lead with two penalties, No.8 Michael Leitch pounced on a loose ball that had been dropped by Richie McCaw to score the first try.

Winger James Lowe then intercepted a loose pass inside his own 22-metre area to score after the half-time hooter to give the Chiefs an 18-6 lead at the break, though it could have been closer had Carter not shanked three kickable penalty attempts.

Carter did manage to find his range again early in the second half, while Horrell added a penalty before another Crusaders' error in clearing their goal-line led to Liam Squire scoring the Chiefs' third try.