Perth Glory have suspended their court action against Football Federation Australia in order to uphold the "spirit of the game".

Instead, Glory will fight to be allowed to play in the A-League finals through the FFA's appeals process. 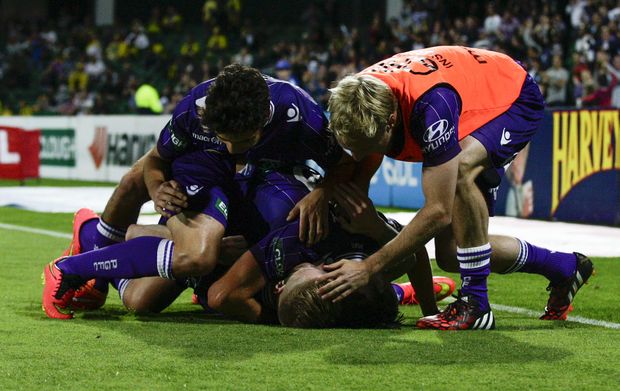 Perth Glory celebrate a goal ...but will the celebrations continue? Photo: Photosport

Glory were booted out of the finals and fined $279,000 on Friday after being found guilty of exceeding the salary cap by around $400,000 this season.

The club filed a Supreme Court injunction last Friday in a bid to buy more time.

That injunction hearing was due to be completed today but Glory have announced they will now proceed first with an appeal through the FFA's independent disciplinary committee.

They have until April 21st to lodge that appeal.

"The Supreme Court action which commenced last week has been suspended, in the spirit of the game, to allow the FFA appeal process to be exhausted," Glory said in a statement.

Although the majority of Perth's squad is contracted for next season, the salary cap drama could give players the right to walk out on the club.

And if the club can't clear themselves over the breaches, owner Tony Sage will ask for the resignation of chief executive Jason Brewer.

However, they will be relegated to seventh at the conclusion of the home-and-away season unless they can overturn FFA's sanctions.

The team will be back in on-field action on Sunday when they host Melbourne City at nib Stadium.