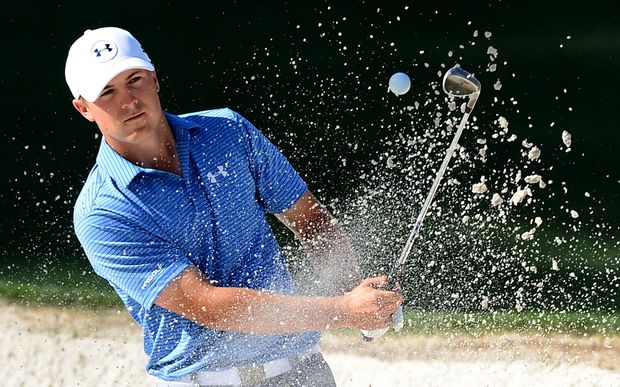 Spieth chips from the bunker on the 10th, Masters day 3, 2015 Photo: PHOTOSPORT

Four strokes ahead going into the final round at Augusta National, the 21-year-old closed with a two-under-par 70 to match the tournament record low of 18-under.

World number four Spieth tied the previous best set by Tiger Woods when he clinched his maiden major title at the 1997 Masters.

His 28 birdies are the most in Masters history.

"It was very nerve wracking today," Spieth said after being helped into the coveted green jacket by last year's Masters champion, Bubba Watson.

"I didn't sleep last night. It's the most incredible week of my life and a dream come true for me."

Justin Rose of England, the 2013 US Open champion, signed off with a 70 to share second place with three-times winner Phil Mickelson, who carded a 69.

Woods, playing in his first competition in two months, finished on five under.

Northern Ireland's world number one Rory McIlroy, who had been on the brink of missing the cut midway through the second round, finished alone in fourth at 12 under after shooting a 66.