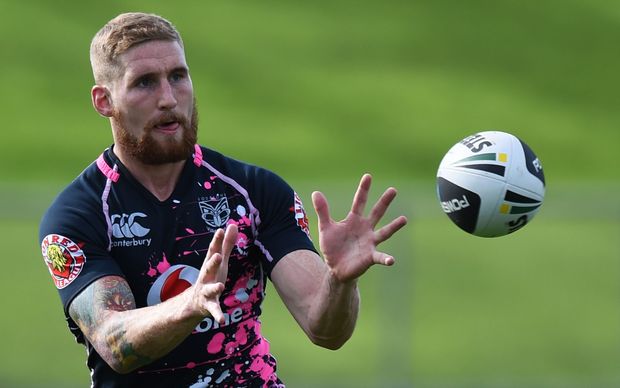 The Warriors on Wednesday announced the signing of the Kiwis and Sydney Roosters star Tuivasa-Sheck for the next three NRL seasons, as well as confirming England international Tomkins will be given an early release from his contract to return to the UK at the end of the year.

Tomkins said his 21-year-old replacement would become one of the game's greats.

"He's young and he's still learning that fullback position. As good as he is now... once he comes to this club he'll be even better."

The Auckland-raised Tuivasa-Sheck was in the Roosters' NRL premiership-winning side in 2013 and also played in the Rugby League World Cup final for the Kiwis the same year.

Meanwhile, Sydney Roosters league players have endorsed the idea of an off-season trade period in the NRL following Roger Tuivasa-Sheck's shock defection to the Warriors.

Michael Jennings and Daniel Tupou said they were saddened by the news their teammate had signed a three-year deal with the Warriors from 2016.

While believing Tuivasa-Sheck had made the best decision for his New Zealand family, the pair agreed they would prefer a window for contract negotiations at the end of each season.

The 2015 season is barely a month old but already a host of big names - including Daly Cherry Evans, Kieran Foran and Trent Merrin - have announced they're leaving their current clubs next year.