The Black Caps skipper Brendon McCullum said some New Zealand players may have decided to call time on their one-day or international careers but there will be no immediate announcements to allow Australia to bask in their World Cup triumph. 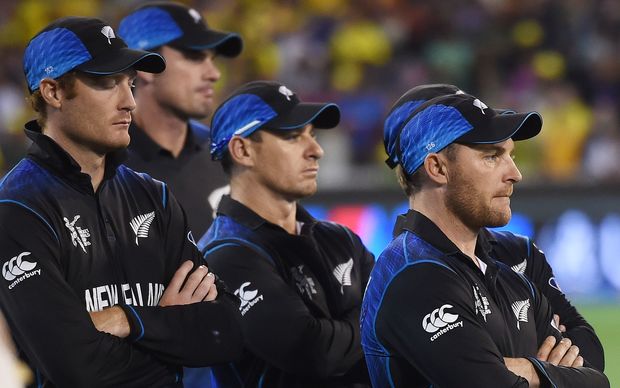 The Black Caps cricketers during the World Cup. Photo: PHOTOSPORT

Australia skipper Michael Clarke announced his retirement from one-day internationals on the eve of the seven-wicket victory at the Melbourne Cricket Ground on Sunday, which earned his country a fifth world title.

New Zealand spin bowling all-rounder Daniel Vettori, 36, is widely expected to call time on his international career after his fourth World Cup, while there have even been rumours McCullum might follow Clarke's lead and quit the 50-over format.

"There may be some players in our group who have decided to retire," McCullum told reporters.

"We'll let the dust settle on this one and we certainly won't try and grab any headlines over the next couple of days because they belong to Australia and they've earned the right to them.

"We'll be gracious in defeat and then we'll work a plan for those who may want to retire but I think it's the right thing to let Australia bask in the glory of their success."

Whatever retirements might be on the cards, McCullum said he hoped the New Zealand team would maintain the aggressive style of play with which they lit up the World Cup.

"I think the team perhaps will change over the next sort of while," he added.

"But hopefully the style of cricket and the things that we've been able to implement with this team and the brand that we're trying to play will remain and develop over the next sort of while.

"Hopefully that will then filter down to some of our domestic cricket, as well, and we'll see some youngsters start to play the game and try and play it the same way that we've tried to operate through this World Cup."

McCullum enjoys a close friendship with Clarke and said his fellow 33-year-old deserved to go out as a winner.

"Michael Clarke has been an outstanding cricketer for Australia, I think his captaincy has been brilliant throughout his tenure," he added.

"He deserves to bow out a World Cup winner, sometimes there is some romance in this game. I think that was one of those occasions tonight."