The Blues remain winless and dead last in Super Rugby, falling to a sixth straight defeat as the champion New South Wales Waratahs won 23-11 in Sydney.

The Blues showed some fight for under-fire coach Sir John Kirwan but ultimately came up short again, as the Waratahs collected their fourth win of the campaign to leave the Blues still searching for a first victory in 2015. 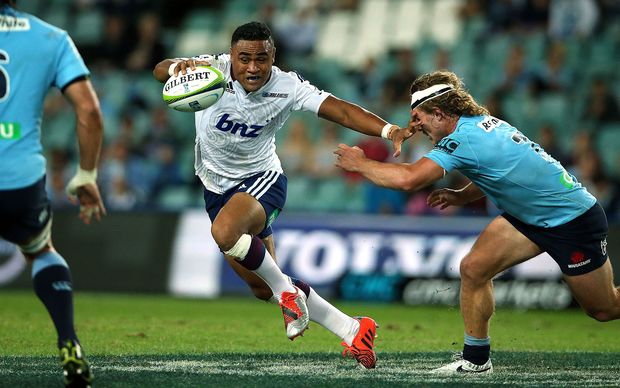 The Blues fought hard but lost yet again Photo: Photosport

He says they now have to beat the Chiefs next weekend in Hamilton, to keep their season alive.

"We're still in the hunt," Kirwan says. "You know, we've got to win two away games and then all our home games... So we've still got a glimmer of hope."

The Waratahs weren't at their best, with a number of attacks breaking down through bundled passes, but they managed the game better in the second half to overcome the visiting basement dwellers.

Phipps crossed for the first try in the eighth minute after the television match official ruled Michael Hooper's questionable final pass had not gone forward.

The Blues, though, refused to buckle and two Dan Bowden penalties sent them in at half-time only a point back at 7-6 after some tough tackling in defence.

Their renewed fight was rewarded with a try to Francis Saili in the 53rd minute after the Waratahs failed to cope with a high clearance kick and a neat offload from Charles Piutau sent the All Black over.

Foley and the Waratahs responded with three penalties after pinning the Blues back in their own half and applying pressure in the right areas.

The hosts denied Kirwan's side a losing bonus point in the final five minutes when Betham finished a nice move, including a Will Skelton offload, to cross for the second try.

The Waratahs are now sixth.

Also on Saturday night, the Highlanders beat the Stormers 39-21 in Dunedin, after the Chiefs beat another visiting South African side, the Cheetahs, 37-27 in Hamilton.