Ireland captain William Porterfield has turned the heat up on the International Cricket Council, demanding answers as to why they want to cut the World Cup to 10 teams. 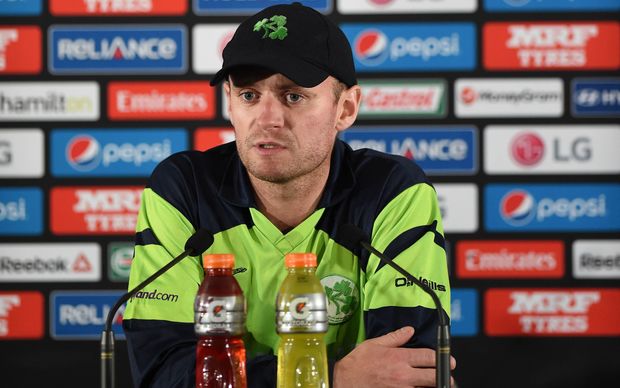 The Irish are viewed by pundits as the perfect example as to why the ICC should work harder to grow the game, given how much potential they've showed at the 2007, 2011 and 2015 World Cups.

Porterfield has voiced the side's concerns over the past month, but rarely been as forthright as he was after their spirited campaign ended with a seven-wicket loss to Pakistan on Sunday.

"I'd love to think it's not our last World Cup game," he said.

"Everyone wants to know what their vision for the game is.

"It'll be interesting to see what their vision is and what their thoughts are behind the 10-team competition and what value there is for other teams playing outside of the top 10.

"I'm sure they're hoping everything blows over the next few weeks and they don't hear much from us.

"Then it's just as easy to brush it under the carpet.

"But I think something has to be done if they want to grow the game."

Porterfield, who scored a classy century in Adelaide, went so far as to question the sport's future in Ireland if the path to the World Cup was made harder.

"What's the point really in us keeping going? I think it's the wrong move," he said.

"A lot of people have spoken out that it is the wrong move ... a lot of influential people have said that, so I don't think the ICC can just ignore that."

ICC boss David Richardson has hinted there may be a rethink, saying he's "learnt never to say never".

But Porterfield suggested Richardson and his colleagues were yet to discuss the issue with anyone from Ireland.

"Not really. I think they've been pretty quiet on the actual subject," he said.

Sachin Tendulkar has been among the many to question the ICC's logic, calling it a "backward step", however Inzamam-ul-Haq offered his support to the ICC on Monday.

"There's talk of a 10-team ICC World Cup in 2019 and I am all in favour of it," former Pakistan captain Inzamam said.

"For associate teams like Ireland, what the ICC needs to do is to arrange regular ODI series against Test nations, say minimum of 10-12 ODIs in a year."