Two goals from Besart Berisha and an Archie Thompson strike have returned Melbourne Victory to the top of the A-League ladder as Kevin Muscat's side beat Western Sydney Wanderers 3-0 at Pirtek Stadium on Friday. 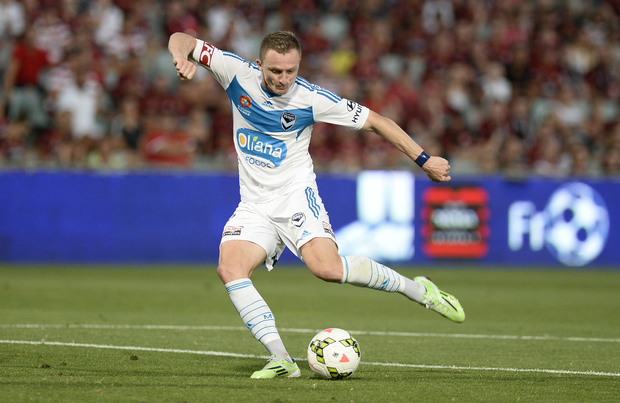 But they can be dethroned by the Wellington Phoenix should the New Zealand side win in Perth tonight.

Fahid Ben Khalfallah set up all three goals in another cultured display from the former Bordeaux midfielder, who will almost certainly be in contention for the Johnny Warren Medal as a result of his outstanding debut season.

Besart Berisha opened the scoring in the 26th minute with a cushioned header after Khalfallah brushed past Sam Gallaway in the Wanderers box and delivered the most delicate of crosses with the outside of his left foot to the Albanian hitman.

The Wanderers almost hit back immediately when Nathan Coe kept out a stinging close-range effort then reacted well to claw away Kerem Bulut's follow-up strike with Nick Kalmar then cracking the loose ball into the side-netting.

But it was the only real chance created by the hosts and Kevin Muscat's side took control of the game in the second half.

Archie Thompson doubled his side's advantage with a typically ruthless finish after being put in the clear by Khalfallah's defence-splitting pass just after the hour.

Berisha added his second - his 11th of the season - eight minutes from time after getting in behind the Wanderers defence and beating an onrushing Ante Covic from the edge of the area, with Khalfallah once more providing the assist.

Berisha is now the first player in A-League history to score 10 or more goals in four straight seasons.