England fans should "hide behind the sofa" rather than watch an Ashes slaughter this year, according to the team's former batsman Mark Butcher.

England were eliminated from the World Cup group stages after an embarrassing loss to Bangladesh followed defeats to Sri Lanka, Australia and New Zealand.

There is no let-up for England, who have upcoming Tests against West Indies and New Zealand before Australia arrive for the Ashes in the northern summer.

Butcher, who played in 71 Tests for England, believes 2015 may prove to be a chastening experience for Peter Moores' side. 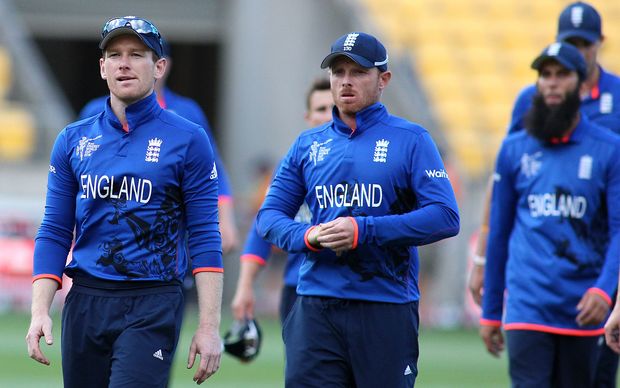 England are out of the World Cup with a game to play. Photo: Photosport

"I'm afraid with the team that we have at the moment, and the way things are at the moment, they (New Zealand) are going to give us an absolute hiding," Butcher told BBC Radio.

"And then when Australia come, just don't watch, hide behind the sofa.

"Because I can see it being an absolutely dreadful six-to-eight months or so of cricket for England and I'm sorry to have to say that."

England have won only one series in six across all formats since Moores was appointed in April 2014.

The team conclude their dismal World Cup campaign against Afghanistan on Friday, but even a win will not prevent a third group-stage exit in five tournaments.

"It's bad. It's been coming and lots of things need to change to put it right," Butcher says.