A Josh Dugan ankle injury further soured a forgettable start to the season for the Dragons.

Dugan was one of the few Dragons who tested the Storm defence in a impotent attacking effort from the home side, before he was carried off in the 69th minute and didn't return.

Melbourne put in a solid defensive effort, captain Cameron Smith the cornerstone of that with 51 tackles. 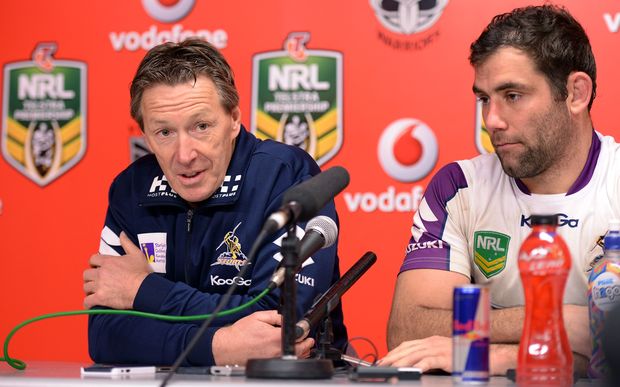 But despite a mountain of possession the Dragons only had a 49th minute try to former Fijian porter Eto Nabuli on his NRL debut to show for their efforts.

Will Chambers forced his way over from close range in the 60th minute for the matchwinner after the Storm led 6-nil at halftime.

A Ryan Hinchcliffe try 10 minutes from time was disallowed after Billy Slater took out Jason Nightingale in the lead-up.

A largely uneventful first half was dominated by the Dragons who enjoyed 64 per cent of possession and 40 tackles in the Storm's 20m zone but were still unable to score.

The sole first half points came when Young Tonumaipea chased down a fifth minute Cooper Cronk kick and Smith converted.

Jesse Bromwich was put on report for a high tackle on Dugan in the 28th minute.

Storm interchange forward Felise Kaufusi was also placed on report in his NRL debut for attacking the legs of a kicking Benji Marshall in the 32nd minute.

Dale Finucane will come under some scrutiny from the match review panel for a high tackle on Dragon Jack De Belin just after the break.