Batsmen Martin Guptill and Ross Taylor spent valuable time at the crease and Daniel Vettori became the first New Zealander to take 300 ODI wickets as the Black Caps claimed a six wicket victory over Afghanistan in their Cricket World Cup clash in Napier. 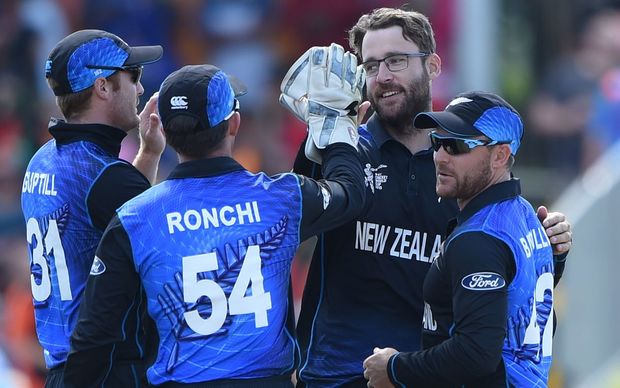 Afghanistan had been dismissed for 186 in 47 overs and four balls, with the veteran Vettori becoming the 12th man and first New Zealander to take 300 one-day international wickets when he produced another impeccable spell of left-arm off-spin bowling.

Captain Brendon McCullum had given his side a rollicking start with 42 runs from 19 balls before Kane Williamson (33) and Guptill took them to 111 for one without looking troubled.

Williamson, however, was caught by Samiullah Shenwari at mid-wicket off Shapoor Zadran in the 19th over before Guptill was run out with 44 runs needed and Grant Elliott dismissed in the same fashion 12 runs short of the target.

Taylor and Corey Anderson (seven not out) guided New Zealand home after Vettori had taken four for 18 from 10 overs with the ball.

The 36-year-old has taken 12 wickets in the tournament at an average of 11.33 and economy rate of three runs per over.

Vettori bowled the third over of the match to enable Tim Southee and Trent Boult to swap ends and bowled Usman Ghani on his first delivery, then took Nawroz Mangal's (27) wicket in the 16th over for number 300.

He is the ninth player to take more than 300 wickets in both tests and ODIs and later took two wickets in successive deliveries in the 20th over but missed the hat-trick.

The 36-year-old Vettori finished with four wickets for just 18 runs and now has 302 ODI scalps.

Boult now has 13 wickets for the World Cup which puts him equal first with Tim Southee as the tournament's leading wicket-taker.

Vettori is the tournament's third highest wicket-taker with 12.

Vettori's first over had put Afghanistan on the back foot after captain Mohammad Nabi had chosen to bat on a wicket considered the best batting surface in New Zealand, before Boult struck twice to reduce them 24 for three.

Mangal and Shenwari managed to see off the opening bowlers before Vettori struck again and then had Nabi caught by Taylor for six and trapped Asfar Zazai lbw on the next delivery to reduce Afghanistan to 59 for six and in danger of being bowled out for under 100.

Najibullah Zadran, who survived the hat-trick ball, and Shenwari (54) then combined for an 86-run partnership that helped them post a score in excess of 150.