The New Zealand Breakers have beaten minor premiers Cairns 86-71 on their home court, to go one win away from a fourth National Basketball League championship in five years. 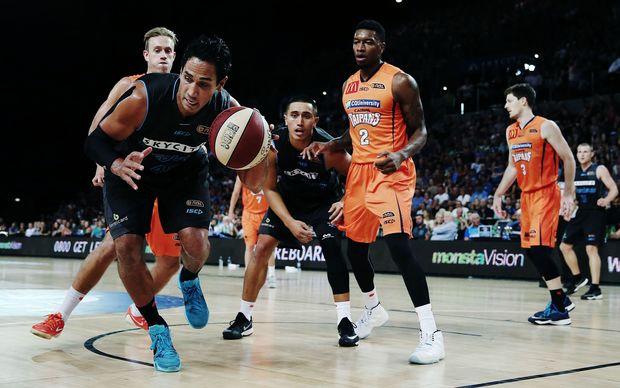 Tai Wesley of the Breakers in action against Cairns Photo: Photosport

A huge offensive effort and an energetic first half, mixed with an off night shooting-wise from the Taipans, was the difference.

The Breakers came out hot, going on a 13-point run and shooting at 90 percent one point as they won the first quarter 28-17.

At half-time the visitors led by 16 points, up 50-34 with 63 percent shooting to the Taipans' miserable 34 percent.

But a big third quarter from the hosts got them back into the game, winning it 26-11 to trail by just a point, as the Breakers captain and defensive inspiration Mika Vukona sat down with three fouls.

At 61-60 the momentum changed as bench guard Rhys Carter scored 10 quick points (of his 12) including two three pointers and the Breakers were up by 11 suddenly.

Even with shooting guard Corey Webster and Vukona sitting down again with four fouls each halfway through the final stretch, Cairns couldn't get back in and the 15-point lead was established with two minutes left as the Breakers went on an eight point run to ice the road victory.

Now the big question is whether they can repeat the performance in Auckland on Sunday - the Breakers lost both their home games to the Taipans in the regular season.