The West Indies opener Chris Gayle hit the first double century in Cricket World Cup history as he guided his side to a victory over Zimbabwe in their group match in Canberra. 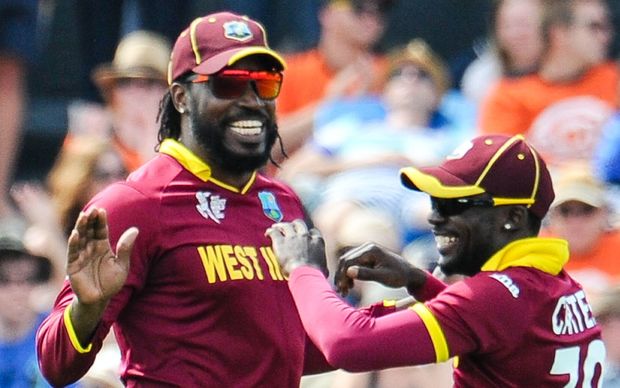 The 35-year-old left-hander reached 200 off 138 balls, the fastest double hundred in one-day history.

His mark eclipsed the unbeaten 188 by South Africa's Gary Kirsten against the United Arab Emirates in 1996.

Gayle hit a total of 16 sixes in 147 balls before he was out for 215 off the last delivery of his side's innings.

He said as soon as he reached 3 figures he knew the big score was on.

"So many people wanted me to score runs and the messages keep coming in, from twitter, it's the first time I've ever seen so many people wanting Chris Gayle to perform so badly and I'm really glad I gave them something to actually cheer about."

Gayle was apparently offended by a suggestion from the West Indies Board president that he retire.

Gayle's last one-day century had come in June 2013 and it had been eight innings since he last scored a half century.

He survived a confident first-ball appeal for LBW to blast 215, shattering a string of records, and with Marlon Samuels scoring an unbeaten 133, the Windies ran up an impressive 372 for 2.

"When I looked at the reply I was like oh you're kidding me, those were not the exact words but swear words hahahaha, and I say come on not again so then big relief and then listen I have to take the bull by the horn and that's the way everything after it started." Gayle said about the LBW appeal.

Zimbabwe, hampered by a rain-affected run chase, did well to reply with 289.

It was also only the fifth double century in all one-day internationals and the first by a non-Indian, with Rohit Sharma (two), Sachin Tendulkar and Virender Sehwag the only other batsmen to achieve the feat.

The second wicket stand of 372 with Marlon Samuels was also a record partnership for any ODI wicket, surpassing the 331 shared by India's Rahul Dravid and Tendulkar against New Zealand at Hyderabad in 1999.