A century from Lendl Simmons has helped the West Indies set a target of 305 for Ireland to win game five of the Cricket World Cup at Saxton Oval in Nelson. 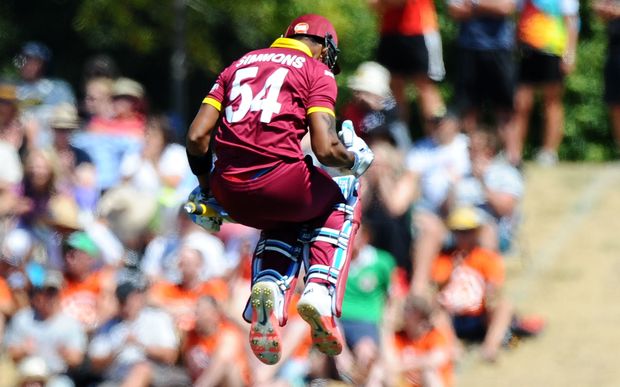 The Irish captain William Porterfield won the toss and chose to field in their Pool B clash, a decision that paid dividends as the Windies slumped to 87 for five in the 24th over.

The opener Chris Gayle could only manage 37 from 65 balls before he was caught out trying to slog spinner George Dockrell over cow corner.

Dockrell trapped Marlon Samuels LBW for no score two balls later which brought Simmons (102) and the all rounder Darren Sammy together in the middle.

The pair restored respectability to the Windies' scoreboard with a 6th wicket stand of 154 runs before Sammy fell in the 45th over for 89.

Simmons brought up his tonne in the final over of the West Indies innings, before falling victim to Dockrell, who finished with three wickets for 50 runs form his 10 overs.

In between innings, Simmons told Sky Sport the Windies' total of 304 for seven was forty runs short of the total his team believed possible on the Nelson wicket.

The two teams have met on five previous occasions in one day internationals, twice in World Cups, with the Windies winning four and one match abandoned.